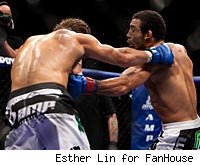 This month's best MMA card is finally upon us, with World Extreme Cagefighting making its return and the featherweight championship of the world on the line. We've got the full preview and predictions right here.

Predictions on the five televised fights:
Jose Aldo vs. Manny Gamburyan
Is it possible that Gamburyan could beat Aldo? Sure, it's possible. Gamburyan is the bigger and stronger man, and he's dominated three straight opponents since moving down to his more natural weight class of 145 pounds. It's possible that Gamburyan could get Aldo in the clinch, take him down with a judo throw, and beat him in the ground, where Aldo hasn't really been tested in the WEC.

But that's an extremely unlikely scenario. In fact, I think the much more interesting question than whether Aldo will win is whether Aldo will win in such dominant fashion that come Friday morning we're all talking about him as not just the best featherweight in MMA but the best fighter in the sport in any weight class. He's close right now, and at age 24 he should keep getting better with each fight.
Pick: Aldo

Jamie Varner vs. Donald Cerrone
This fight is in the co-main event slot because it's a grudge match between two guys who genuinely dislike each other and are more than happy to engage in plenty of promotional trash talk. The WEC's lightweight division has passed them both by since Varner beat Cerrone a year and a half ago, however, and I don't see either one of them getting another crack at the lightweight title that Ben Henderson now owns.

But while the fight isn't as important as co-main event status would suggest I do expect Varner and Cerrone to engage in a fun, spirited 15 minutes of action, and I think Varner will come out on top because of his superior striking.
Pick: Varner

Miguel Torres vs. Charlie Valencia
Once considered among the handful of truly elite fighters in MMA, Torres hasn't won in a year and a half and desperately needs to beat somebody. I expect him to beat Valencia, who's going to have a major height and reach disadvantage against the lanky Torres. Valencia really should be fighting at 125 pounds, but until the WEC adds a flyweight division, he'll have to settle for fights against bigger opponents like Torres.
Pick: Torres

Chan Sung Jung vs. George Roop
Roop was on Season 8 of The Ultimate Fighter and got three UFC fights, where he showed that he really couldn't compete at the UFC level. He's got a better chance of beating serious opposition now that he's fighting guys his own size at featherweight in the WEC, but I think Jung will take him down and submit him pretty easily.
Pick: Jung

Leonard Garcia vs. Mark Hominick
Garcia is returning to the cage for the first time since slugging it out with Jung at WEC 48, and I expect to see a Garcia-Jung rematch on a WEC pay-per-view card in early 2011. That rematch will probably happen either way, but it'll be easier to promote if they both win on Thursday night, which I expect to see.
Pick: Garcia