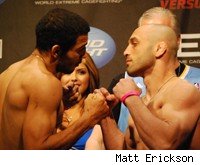 Since entering the WEC, Jose Aldo has been so dominant that many have been left to wonder if there's any featherweight in the promotion who could really cause him any trouble. A powerful puncher with underrated wrestling and a black belt in jiu-jitsu, Aldo might just be the best pound-for-pound fighter in the world.

He's not short on confidence, either. During UFC 119 weekend, Aldo met with the media and didn't hesitate in saying it's his goal to be considered the best in the world. When asked where he presently considered himself, he said No. 2, only behind UFC middleweight champ and close friend Anderson Silva.

A few months ago, Manny Gamburyan wouldn't have seemed a likely fighter to threaten Aldo's dominance of the division. After a strong start in the UFC, Gamburyan had fizzled out, and eventually moved a weight class down into WEC's featherweight picture.

Still, it seemed that Gamburyan lacked the firepower to compete with Aldo in any meaningful way. The biggest reason for that was that while Gamburyan had an excellent ground game, powerful judo and was great in scrambles, he didn't seem to have the striking to stand with Aldo, as evidenced by the fact that he had gone nearly seven years between TKO victories.

Yet there was always the underlying truth that Gamburyan was a guy often fighting out of his weight class. It's easy to forget that his first knockout came against Jorge Santiago, a fighter who is now considered a world top 10 as a mdidleweight. He went to a decision with Sean Sherk when Sherk was fighting as a welterweight and beat former UFC and Strikeforce welterweight Sam Morgan at a time when Morgan was on a roll, winning 10 of 11.

While Gamburyan didn't flash any meaningful power for a long stretch, he did so when it mattered. With a potential title shot on the line, he finished Mike Brown, a rugged former champion who in nearly 30 fights, had only been TKO'd one other time in his career, by Aldo.

Despite that, there's little belief that Gamburyan can pull off the upset at WEC 51. Aldo is currently around a 6-to-1 favorite to win his 11th straight fight, and for good reason.

So far during his WEC run, Aldo has handled every style thrown his way. He's beaten grapplers like Alexandre Nogueira, strikers like the aforementioned Brown, and wildcards like Urijah Faber.

It seems clear that Gamburyan's best chance to beat Aldo would be in getting the fight to the ground, as no one's yet to out-strike him. That will be easier in theory than practice. Aldo has not been taken down in any of his last five fights, successfully defending all eight takedown tries against him, including five by Faber.


Fowlkes: Gamburyan: I Won't Be Surprised if I Knock Aldo Out With a Flying Knee

Gamburyan will come at him with a different approach, emphasizing his judo roots. But Aldo is no stranger to the martial art, having studied judo in his earlier days.

If Gamburyan can't get him down, it's Aldo's fight to win. In the standup game, he's very accurate. Over his last five fights, he's landed 59 percent of his strikes, and with his power, that's too many opportunities for a finish. He also has a significant reach advantage that will force Gamburyan into closing the range, putting him into harm's way -- particularly for Aldo's powerful kicks that serve to wear down an opponent and cause openings. The combination of those factors have to swing things in his favor.

Still, you have to wonder if Gamburyan's knockout over Brown is a sign of things to come as he continues to adjust to his new weight class. Gamburyan's hands have improved -- particularly his jab -- and he throws his power punches with conviction. He also works better angles than he once did.

But the standup is still Aldo's world, and this is likely to be a primarily standup fight. Aldo is too accurate, too powerful, too dymanic and the reach advantage only further swings things in his favor. The champion retains. Aldo via second-round TKO.