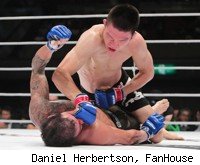 Dream lightweight champion Shinya Aoki is set to pay his respects to his first home, DEEP, on the promotion's 10th anniversary card on Oct. 24 in Tokyo, Japan.

Just under a month after beating Marcus Aurelio at Dream.16, Aoki will be facing former professional boxer Yokthai Sithoar at DEEP 50.

Sithoar, a former WBA boxing champion, is a 35-year-old Thai fighter who last boxed in June 2004. Despite a 29-6-3 overall boxing record, Sithoar's last three fights were losses. Sithoar has zero MMA bouts under his belt.

Aoki began his career with DEEP in November 2003 before leaving for Shooto after his first career loss to Jutaro Nakao at DEEP 16 in August 2004. Once Aoki made a name for himself in Shooto as the "middleweight" (welterweight under Unified Rules) champion, he moved onto PRIDE and now, Dream.

The matchup is clearly not a competitive one, but a featured attraction for Aoki to participate on the anniversary card. The fight will be simple: Aoki will try to take it to ground quickly for the submission, while Sithoar will look to time a knockout punch.