No Longer His Own Boss, Miguel Torres Turns to Firas Zahabi for WEC 51 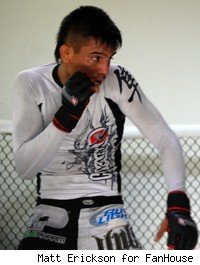 BROOMFIELD, Colo. – Brad Pitt, as Tyler Durden in "Fight Club," says, "It's only after you've lost everything that you're free to do anything."

To say Miguel Torres "lost everything" might be something of a stretch. But after back-to-back losses for the first time in a career spanning 40 professional fights (and a dozen others that exist off the books), Torres definitely reached that type of moment of critical mass.

After years of training himself at his Torres Martial Arts Academy in Hammond, Ind., near his hard-luck, blue-collar hometown of East Chicago, Torres was living the good life as his own boss. Sure, he made sporadic trips to drill with coaches like Robert Drysdale and Mark DellaGrotte. He rolled with Frank Mir and Kenny Florian, Rashad Evans and Kurt Pellegrino.

Torres turned to Firas Zahabi at the Tristar Gym in Montreal, who is widely credited with helping UFC welterweight champion Georges St-Pierre get on top and stay on top. And for the first time, Torres put his career in the hands of someone other than himself.

"I had to become a student of the game again," Torres said. "I was doing my own thing for so long that I didn't look at the other side of the coin while everybody was catching up. Everybody's watching me fight on TV, they're watching my highlights, they're watching my interviews and they're getting ready to fight me. And I'm living in a care-free world while I'm sitting on top – and I didn't see that coming."

"That" was Brian Bowles' right hand at WEC 42. Torres caught Bowles with a combination deep in the first round and had him retreating. He chased – and ran right into the first knockout loss of his career. The WEC bantamweight title he had defended three times was gone, as was some of the mystique that had many saying he was one of the top five pound-for-pound fighters in the world.

Torres admits he should've changed his training strategy after that loss. He should've sought out a permanent trainer. But he didn't. He stayed at home, running his gym, teaching classes, running with his boys, looking after his wife and daughter. He was stubborn, thinking he just got caught by Bowles. And at WEC 47 in March, Joseph Benavidez made him pay, submitting him in the second round.

"Before the Benavidez fight, I was still doing the same things I was doing before all the other fights – if not less because I was injured," Torres said. "So it was just a bad mentality, it was an old-school mentality, a tough-guy mentality where I can do anything – it doesn't matter if I'm hurt or if I don't have a training partner. I was trying to do everything myself. Now I know you can't do that. You've got to have a fight family to look after you and help you grow. So the biggest thing out of (training with) Firas is that. I'm in a way better place now mentally."

Torres will try to get his fight career back on track Thursday at WEC 51 against Charlie Valencia, who is riding a three-fight winning streak. And he'll do so under Zahabi's tutelage for the first time. Zahabi agreed with Torres' contention that while he was champion, the rest of the MMA world was catching up.

"When you're champion, it's always harder," Zahabi said. "And the reason for that is, everyone's always watching you. Everybody's dissecting his game. It's really everybody against you. He was being watched by everybody, and he wasn't watching everyone else. How could he? There's so many contenders. It's going to be good now to look back, see what he's done wrong and try to improve on that."

"I'm not going to go out there and fight recklessly," Torres said. "I could put him away standing up or on the ground, but I'm not going to force it. That's the biggest thing I've worked on. I get too over-anxious sometimes when I hit guys and I want to go out there and go for a kill – and that puts me in danger. So I worked a lot on just picking guys apart and making them make the mistakes – not me making the mistakes."

After WEC 51, Torres will spend some time with his family at home in Northwest Indiana, then attend the London UFC Fan Expo. And then it's back to Montreal, where he plans to make Tristar his home away from home. After all, if he had lost nearly everything, he wants to get it back.

"I still have a long way to go," Torres said. "I'm not saying I'm on top of everything I have to be on top of. But I have a real good idea of what I've got to do. The game plan's laid out, and I just have to put the time in."