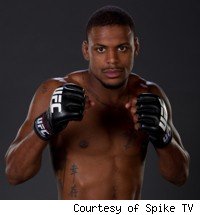 Michael Johnson submitted Aaron Wilkinson in the third round of their fight on Episode 3 of Season 12 of The Ultimate Fighter, but he didn't have an easy time: He admits that he was disappointed with the way he fought in the first round and had to come on hard late in the fight to earn a tough victory.

Johnson also said in an interview with MMAFighting.com that his meeting with Mike Tyson on the show was one of the greatest thrills of his life. The interview is below.

Michael David Smith: When Georges St. Pierre picked you to fight Aaron Wilkinson, what did you think of the match-up?
Michael Johnson: I thought it was a good match-up. GSP asked my opinion on it and I told him that was the guy I wanted to fight. I thought Aaron and I would make for an exciting fight, but I saw some flaws in his game I could capitalize on.

You seemed to spend a good amount of one-on-one time with GSP prior to the fight. What was that like?
It was great. GSP tightened up my game and really got me ready. It made me well prepared.

You were definitely getting the better of the striking exchanges in the early going, but for the last minute of the first round Aaron had you on your back and was pretty well controlling you on the ground. Were you hurt at all, and did you think maybe you had just given away a round that you should have won?
He definitely didn't hurt me, but I was disappointed in myself that I got taken down and held on my back like that. Credit him for getting me down but I just took the wrong time to rest and he took advantage of it. I felt like I was winning and then I gave him that last minute of the round.

In the second round you seemed more comfortable, did you feel like you had won the round, and were you expecting a sudden-death third round?
Yeah, I knew there would be a third round. I knew I had beaten him in the second and figured he got the first. I was ready for a third round.

In the third you really exploded on him and got the submission quickly. How did you do that in the third when you couldn't in the first two?
The difference was that I knew I had to finish him in the third round, and I also thought he was getting tired and that if I pushed him I'd come away with the win.

On TV we could really hear GSP shouting instructions to you during the fight. Could you hear him while you're fighting or do you tune that out?
I definitely heard him, and I was trying to do the things he was yelling out.

How would you say Aaron compared to the quality of opponents you had faced before that in your MMA career?
He's a great fighter. He's definitely one of the best fighters I've faced. He has good stand-up, he's well rounded, and I underestimated his wrestling a little bit, which he made me pay for. I was pleased to get a win over a good fighter.

Coming onto the show, all of Wilkinson's losses were by submission. Did you know that?
No, I didn't know that at all. Early in the fight I thought he was giving me some opportunities to get his back but I didn't really get my hooks in to finish him. I didn't know that he had lost all his fights by submission because in the house we didn't really have the opportunity to look up guys' records or find their fights on YouTube or anything.

Team GSP is 2-0 now. Did that matter to you or was it mostly an individual competition and not a team thing?
It was exciting for me. I was really thinking of it as a team competition, at least at that point, and I was excited that we were up two to none.

What did you think of meeting Mike Tyson?
It was great, man. It was a dream come true. I had been saying for a long time that Mike Tyson was a guy I'd love to meet and it was great for me to see him.

You're 24. How well do you remember Tyson as a boxer?
I just saw him a little bit as a little kid, but what I loved is that he was going in the ring and trying to finish guys. I love the way he fights and I've tried to mirror that, have that same style.

Check back every Thursday morning for Johnson's take on the previous night's episode of The Ultimate Fighter 12. For last week's entry, click here.