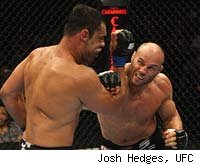 In the midst of a three-match win streak as well as a Hollywood career that is quickly generating momentum, multi-time UFC champion Randy Couture could soon be faced with a decision between his two professional worlds.

The legend's enviable future dilemma was best exhibited during the month of August. On the 13th, Couture helped open Sylvester Stallone's "The Expendables" to the No. 1 spot in the US box office. To date, the film has made over $100 million domestically and around a quarter-billion dollars worldwide. Then, on the 28th, he moved back to the realm that made him famous, and submitted boxer-turned-mixed martial artist James Toney in a bout that received major mainstream media buzz.

So what's next for the 47-year-old Couture? Though no firm offers have been made and nothing has been set in stone, both the UFC and Hollywood remain viable options.

Couture -- who has three fights left on his current UFC deal -- remains open to possibilities in both film and sport, but another possibility exists for fight fans: that they may have seen the last of the legend in the octagon.

"It's possible," Spira said. "I'd say right now it's a toss-up. If something came up that was interesting, he would fight irrespective of whether he got a meaningful Hollywood role. But there's other stuff for him to do that's MMA-related. I think many would be surprised at some of the things we are working on. So he doesn't have to be actively fighting in the ring to remain active. Is it possible he may not fight again? Yeah, it's possible. I'd say it's a toss-up."

By all accounts, Couture's body is holding up well enough to continue on with his MMA career, but he may soon be forced with a difficult decision about his fight life based on other considerations. Rarely a day goes by without some commitment, and his show business opportunities continue to grow.

If he does return to the cage, it may be a while. Couture in recent months has noted that he was most likely to entertain offers for "interesting" fights.

That approach has been exemplified in his recent fight history. After losing the heavyweight championship to Brock Lesnar in Nov. 2008, he stayed in the division to face Antonio Rodrigo Nogueira. Then he moved to light heavyweight to face Brandon Vera and later Mark Coleman, before lobbying for the match with Toney in what was predestined to be a major gate attraction. That fight was originally designed at a catch weight before being officially sanctioned as a heavyweight tilt.

"I'm not sure that Randy is focused upon whether or not he has another run at the title," Spira said. "If they said, 'Will you fight Shogun [Rua] for the title?' I think he would, but the title itself is not as important as the fight he's offered."

Amateur matchmakers have tried to figure out Couture's next move based upon current UFC conditions, but many of the current top contenders -- fighters that would probably most stoke Couture's competitive fires -- are already locked into fights.

Division champion Mauricio "Shogun" Rua will be facing Rashad Evans upon his return from injury. Lyoto Machida and Quinton "Rampage" Jackson will square off in Detroit in November. Rich Franklin remains on the shelf while rehabilitating an injury.

Because of that, along with rapidly filling cards, it seems unlikely that Couture will return to the Octagon in 2010, despite coming out of his UFC 118 match with little damage.

But another, more remote possibility exists, the possibility that the ageless wonder may have finally seen his last battle in the Octagon.