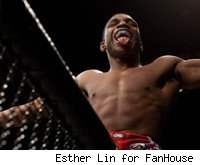 In a matchup with fireworks written all over it, kickboxer Paul Daley will take on slugger Scott Smith on Dec. 4 at Strikeforce: Henderson vs. Babalu in St. Louis.

First reported as in the works by CSNCalifornia.com, MMAFighting.com on Tuesday received confirmation from Strikeforce that the welterweight bout is set to go.

A crowd-pleasing fighter known for a trio of incredible come-from-behind wins, Smith (17-7) will be dropping down to welterweight after fighting the majority of his career at middleweight. Smith is 3-2 with the Strikeforce organization and is coming off a TKO loss to Cung Le in June.

Meanwhile, Daley (25-9-2) fought earlier this month and defeated Jorge Masvidal in a close decision at Shark Fights 13. Shortly after the win, Daley signed a multi-fight contract with Strikeforce. Daley, who this year was a fight away from challenging for the UFC welterweight title, is on a two-fight win streak since his loss to Josh Koscheck at UFC 113 in May.

The Dec. 4 Strikeforce show features Dan Henderson taking on Renato "Babalu" Sobral in the main event as well as the return of former NFL star Herschel Walker. Tickets for the event at the Scottrade Center go on sale to the general public Friday.

MMAFighting.com's Ariel Helwani and Mike Chiappetta contributed to this report.