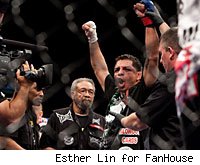 Leonard Garcia isn't ashamed to admit it: sometimes he's scared when he walks into the cage on fight night. In fact, he prefers it that way. If the opponent he's fighting isn't at least a little bit terrifying, then what's the point?

"I don't want to walk into a fight thinking I can win," Garcia told MMA Fighting. "I want to walk in feeling a little worried about the guy. The fights that scare me are the ones where I think I do my best. I feel like it's really important to have a guy in front of you that scares you."

That's how it was when he met Chan Sung Jung in his last bout, he said, and look how well that one turned out. And when he faced Hiroyuki Takaya at WEC 32?

"I was scared to death," he said. "And Jens Pulver, too. All three of those fights, it was like pins and needles the whole time. I felt it walking in."

Fans learned everything they needed to know about Garcia's brawlability in his fight with Jung, which was heralded as one of the best fights of the year, and which sent both men to the hospital afterwards.

Those kinds of fights are nice for fans, but one has to wonder how long a fighter can keep that up. Garcia turned 31 in July. At a certain point, those brawls start to add up. They take a toll on the body. Garcia seems to realize that, even if he can't get himself to change now.

"Ninety percent of the time if you run a car right up to the red line in every gear, the car's not going to be doing so good the next day. I understand that. I know that. I'm mentally and physically prepared for that going in," he said. "I feel like those 15 minutes, that's my time to show people what I'm all about. You can't do that if you're worrying about tomorrow."

At the same time, Garcia knows his fighting days won't go on indefinitely. He estimates he probably has four more good years in him, taking him right up to around his 35th birthday. That means if he's going to make a run at the WEC featherweight title, he has to do it now, and it has to start with the Hominick fight.

"I feel like this fight is a huge step for me. There's not a No. 1 contender in our weight class right now. There's so many guys whose names are being tossed around. I feel like this is one of those fights that could put me right on the cusp of getting a title shot, so I feel like I have to perform."

Maybe that means he'll have to try and stay away from the all-out, slugfest style. Maybe it means he'll actually have to develop some defense, which he admits he's never been all that interested in.

Or maybe those are just things you tell yourself, and when you get in the cage and the punches start flying, your true personality can't help but reveal itself.

"I don't hold anything back," Garcia admits. "People know that about me. Whatever the consequences are, smiling at the hospital afterwards is something I'm totally fine with."