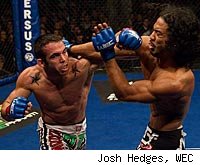 If it feels like Jamie Varner and Donald Cerrone have been at each other's throats for two years, well, it's because they have.

The two first fought in January 2009. Varner won via technical decision after Cerrone landed an illegal knee to Varner's head in the fifth round of their title fight.

Varner was winning the bout on most people's scorecards up until that point (I had him winning four rounds to none), but Cerrone, who was beginning to put the heat on Varner in the fifth stanza felt like the then-champion was looking for a way out.

Varner and Cerrone hugged it out that night in San Diego and promised to fight again sometime in the near future. There appeared to be a mutual respect between the fighters who had just gone toe-to-toe for almost 25 minutes, but that fight just kicked off an avalanche of trash-talk that has lasted approximately 21 months.

For a number of different reasons -- injuries being a primary one -- Cerrone and Varner's paths never crossed until now. The lightweights will finally look to squash their long-standing beef Thursday night on Versus at WEC 51 in Broomfield, Colo.

And while a lot has been said by both fighters since they met at WEC 38, things boiled earlier this month when Cerrone said on TapouT radio that, "I hope my emotions take over and I just kill this dude. I hope this is the first death in MMA."

In the statement, Dropick added that the organization would not tolerate that kind of talk from Cerrone, who also used homophobic slurs to describe Varner, or any other fighter. It has yet to be made clear what kind of punishment, if any, "Cowboy" received or will receive.

Regardless, Varner said on Monday's episode of The MMA Hour that Cerrone crossed the line in his pre-fight trash-talk and that he is doing a disservice to the sport of MMA.

"He set MMA back about 10 years," Varner said. "I mean, people, outsiders, who don't really know the sport, they have this common misconception that we're all just a bunch of neanderthals and barbarians, but there are a lot of us that are educated, well-spoken, well-mannered, well-tempered human beings. And to see a guy like that come across the way he has, it definitely feels like it does our sport an injustice and it sets us back a little bit.

"So I definitely feel like he's crossed the line a bunch of times. One of the videos that the WEC posted, he's cussing and just coming across like a barbarian. It's just retarded. He's like an uneducated hillbilly. It's like, dude, you're a representative of not only an organization but of a sport. So you would think that he would be a little more well-mannered, but hopefully after my fight with him Thursday night, maybe he'll be a little more humble."

Cerrone has apologized to Varner for his remarks, but the former champion doesn't think he was sincere in doing so.

Since the WEC 38 title fight, Varner is 0-1-1, while Cerrone is 2-2. Varner missed a year of action after the fight to nurse a laundry list of injuries he sustained in the bout.

Cerrone, who lost an interim title fight in October and an official title fight in April to Benson Henderson, hails from nearby Colorado Springs, so it's clear that he will be the fan favorite inside the 1stBank Center. That's not really issue for Varner, who is one of the more polarizing figures in MMA.

Simply put, fans either like him, or really, really don't.

"I'm an exciting fighter to watch. I fight with all my heart. I mean, raw emotion. I lay everything on the line every time I fight. So, with that being said, I can hold my head high and I can go to sleep at night knowing that I train hard, I fight hard and I bring it every single time. And there's not one person in the division, whether it's UFC or WEC, that can take me lightly.

"So I'm confident; I'm a happy person. I'm going to let the fans and the people say what they want to say, and I'm just going to go out there to either fight to earn their respect or I'm going to fight just keep my fans happy, the ones who are loyal to me."

So on Thursday night, one of the longest standing feuds in MMA will finally, hopefully come to an end. It's a fight that is sure to produce some fireworks in the cage, and that's a good thing because it's seems like both men have run out of the things to criticize each other about.

Case in point: they are now arguing about how to correctly pronounce Cerrone's last name. Seriously.

"Look at how it's spelled," Varner said. "It's spelled Cerrone. I mean, you think about it: it's C-E-R-R-O-N-E. Now, there are words like "zone" and "tone," you don't pronounce them ZO-NEY or TO-NEY. I think he's just an idiot and doesn't know how to pronounce his own damn name.

"If he wants to pronounce it like CER-RONEY, he's going to have to add a vowel."

Grammar trash-talk. These two have officially covered all the bases.

(Ed. note: Watch Monday's episode of The MMA Hour below. The Varner interview starts at the 46:00 mark.)