Frankie Edgar to Defend Title Against Gray Maynard at UFC 125 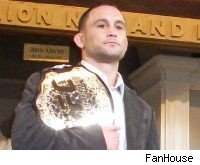 Gray Maynard clinched his shot at the UFC lightweight title with a win over Kenny Florian in August. On the same night, Frankie Edgar defended his division championship by defeating BJ Penn. Now the two will share another date, this time with gold on the line.

The UFC lightweight stars will square off for the 155-pound championship at the MGM Grand Garden Arena in Las Vegas during the New Year's Day UFC 125 event, a source with knowledge of the situation confirmed to MMA Fighting.

The bout will be a rematch of their April 2008 fight, won by Maynard in a unanimous decision. It remains the only loss on Edgar's record, as the New Jersey fighter has since won five in a row, including two straight wins over the legendary Penn in establishing himself at the top of the world's lightweights.

Nicknamed "The Answer," Edgar (13-1) easily outpointed Penn at UFC 118 in Boston on Aug. 28, winning all five rounds on all three judges scorecards.

Meanwhile, Maynard has still yet to taste defeat in his pro career, boasting a 10-0 record with one no contest. Known for powerful takedowns and a grinding, physical style that led to his "Bully" nickname, Maynard has been considered a future contender from his early days with the promotion.

Still, he was bypassed for a possible title shot in favor of Edgar earlier in 2010.

In their first bout at UFC Fight Night 13 in Broomfield, Colorado, Maynard largely controlled Edgar with his wrestling game en route to the victory, as all three judges scored the bout 30-27 in his favor. Despite his recent run of success, Edgar has been installed as the early underdog by oddsmakers, with Maynard a slight favorite.