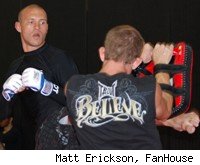 WHEAT RIDGE, Colo. – There are grudge matches, and then there's Donald Cerrone vs. Jamie Varner.

A rematch nearly two years in the making, the lightweights finally meet again at WEC 51 on Thursday. Think there's a chance the bad blood might be over after the fight, like has been customary in many other heated rivalry showdowns before it?

"Hell no," Cerrone told MMA Fighting on Tuesday after finishing a workout at the Grudge Training Center outside Denver. "I hope I knock his (butt) out. I'll say, 'Hey, (b----) boy, you wanna have a rematch in your home state in December? Let's do it. Run it back. Let's go."

For his part, Varner said on a media call last week that he hopes the feud ends Thursday. But he's realistic about it, especially given Cerrone's level of disdain for him.

"We get to go out there, we get to settle our differences, and hopefully we walk out of the cage and the beef is squashed," Varner said. "Or, ya know what? Maybe the animosity continues. But nevertheless, I'm not going to concern myself with it anymore. I'm not going to let the negative energy and the bull(crap) drag me down."

Cerrone and Varner first fought at WEC 38 in January 2009. Varner was the lightweight champ. Cerrone was the top contender. In a back-and-forth bout, Varner looked to be on his way to a decision victory when, in the fifth round, Cerrone landed a knee to the head while Varner was still on the ground, though just barely. When Varner said he was seeing double, the doctor waved the fight off and when the cards were read, Varner had defended his belt by split decision.

Since then, Varner has gone through several injury rehabs. When he finally got back in the cage a year later, he lost his title to Ben Henderson. In June, he fought to a split draw with Kamal Shalorus. And through it all, Cerrone has never stopped wanting to get back in there with Varner.

At times, the trash talk has gone a little too far. Earlier this month, Cerrone told a radio show he hopes Varner "is the first death in MMA," forcing the WEC to issue an official statement condemning the comments. Cerrone said on Twitter that he crossed the line and was sorry. And he took some flak for dropping a homosexual slur and some questionable use of a derogatory female term, as well – which he used again Tuesday.

But Cerrone said when it comes to Varner outside the cage, there's no changing his opinion.

"You can't change who you are as a person," Cerrone said. "As a fighter, I've got nothing bad to say about him. He isn't where he is as a fighter, he's not a (former) champion, because he sucks. As a fighter, he does what he has to do and I credit him a lot. I think he's a very good fighter. But as a person, I just don't like him. I couldn't just hate you and you not hate me back. I don't think it works like that."

With so much already said, Cerrone does have concerns about backing things up. And he's been working with sports psychologist Brian Kane, as well, to help him with the mental aspects of fighting and fight preparation.

But Cerrone, a Colorado Springs native fighting in his home state for the first time in more than three years, admits there's no getting around it – he's fighting angry on Thursday night. And he'll do it

"Hindsight's 20/20, so I should probably not let my emotions take over," Cerrone said. "But I'm going to. And I'm going to try to do a lot of damage to him. That's my game plan. I'm taking a lot of heat for things I've been saying, but I'm in that mindset. I don't like him. I'm planning on doing everything I say I'm gonna do."