The Unsolicited Advisor: Save Your Disdain for the People Who Deserve It 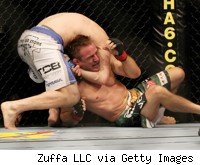 From the moment Bruce Buffer announced that Sean Sherk had won a split decision over Evan Dunham at UFC 119 last Saturday night, the experienced MMA observer could have written the script for what was about to happen next.

Sherk, exhausted after three exciting rounds of fighting, walked over to where Joe Rogan was waiting to interview him. Only before he could even hear the end of the first question, in came the flood of boos, drowning everything else out even as Rogan tried in vain to talk some sense into an angry and probably mostly drunk mob.

This is where, if an alien were watching his first UFC event in a misguided attempt to learn something about Earth culture, he'd be forced to conclude that sometimes we just hate stuff for no reason. Here's Sherk, a former UFC champion and veteran of the sport, who just gave us three hard rounds, and now fans are booing him simply because he won.

Only they're not booing him. Not really. We know this, in the same way we know that fans aren't really cheering the sight of Ashton Kutcher and Demi Moore so much as they are cheering the idea that a guy like Ashton Kutcher, which is to say a guy with no discernible talent, could get a woman like Demi Moore.

Instead, they're booing the decision. They're expressing disdain for the judges – in this case, Cecil Peoples and Glenn Trowbridge.

The trouble is, that's not what it feels like as Sherk is standing there trying to do his post-fight interview. To an outside observer it feels like they're booing him as a fighter, and my guess is that's also kind of what feels like to Sherk, and to Sherk's family and friends who happen to be watching.

Don't get me wrong, I don't think Sherk won the fight with Dunham either. I thought he clearly lost rounds two and three, but was merely lucky enough to have a couple clueless judges sitting cageside that night.

Still, you can't blame Sherk in that situation. Even if you don't think he deserved to win, what would you have him do? Should he give his win bonus to Dunham? Should he get on the mic and talk about how unworthy he is of the victory?

Winning a decision that should have gone the other way is the fighter equivalent of having the IRS make a mistake in your favor. There's no way you're going to write them a letter and tell them they didn't charge you enough in taxes. Not unless you're one of those people who's honest to the point of being annoying.

Let's not forget, in Sherk's mind, he probably did win the first two rounds. As anyone who's been in an actual fight already knows, as long as you're able to avoid the emergency room afterwards, it's pretty easy to talk yourself into thinking you got the best of it.

If the bout is at all close, an MMA fighter is almost always going to think he won. That's just the way fighters are programmed. They're also going to think that even the opponent who gave them their worst beating to date is in serious trouble if they ever get a rematch (just take a look at Brandon Vera's recent comments about Jon Jones, for example).

My point is, you can't blame the fighter. Blame the judges. Boo them, but do it in such a way that the disdain doesn't appear to be directed at the fighter. I suggest either limiting the boos only to the three-second window after a bad decision is announced, or else waiting until the fighters clear the cage and then letting the judges hear it, perhaps with chants of 'Ce-cil! Ce-cil!' over and over again until he finally stops playing Brick Breaker on his Blackberry (or whatever it is he does during fights) and runs crying from the arena.

Okay, so maybe that's a little harsh, but you see where I'm going with this.

It's perfectly fine to voice your disapproval with a judges' decision or a referee stoppage. Just make sure you aim it at the right person. When a fighter's only crime is being the beneficiary of someone else's mistake, the last thing he needs is to get caught in the crossfire.