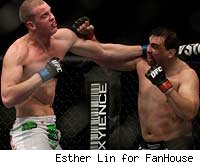 With four wins in his last five UFC fights, the 22-year-old Stefan Struve's future remains bright with the company, and on Tuesday it was announced by his management that the Dutch heavyweight has signed a new four-fight UFC contract.

The six-foot-11 Struve in his five-plus years of fighting MMA has compiled a 20-4 record with an impressive submission count of 14.

In his last fight at UFC 117 in August, Struve won Knockout of the Night honors for his second-round finish over Morecraft.

Struve's next fight is to be announced.