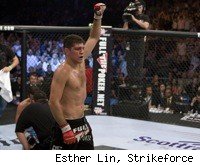 Nick Diaz has always done things his own way, so it should have come as no surprise to anyone when the Strikeforce welterweight champion no-showed a conference call to hype his upcoming title defense.

Yet it didn't lessen the reaction of his Oct. 9 opponent, KJ Noons, who seemed so frustrated by Diaz's absence that while discussing his issues with the champ, he ripped off a string of expletives that can't be reprinted here.

"Pretty unprofessional," was the most family-friendly description of Diaz provided by Noons when it came to his media obligations.

Midway through the scheduled 2 pm ET start time of the call, Diaz's manager and trainer Cesar Gracie joined the fray, explaining that Diaz has never had any interest in sharing time on a call with his opponent.

"He just doesn't operate in that mindset of this is a sport and we're going to talk about it, and shake hands in the middle of the ring," Gracie explained when asked by MMA Fighting about Diaz's conference call objections. "It's contrary to what makes him tick. He's not going to talk to someone on the phone that he's going to fight.

"A lot of promotions want the guys to talk, and they talk amongst themselves and hype it up," Gracie continued. "It gets to the point where it's like they make a rivalry to get it going and it's a fake thing. With Nick, it's never a fake thing. It just doesn't motivate him to talk to his opponent. He wants to fight the opponent and not have a conversation. That's how he operates."

There's no fakeness in this one. Noons and Diaz first fought for the now-defunct EliteXC championship in Nov. 2007, with Noons winning via doctor's stoppage due to cuts after the conclusion of the first round.

Afterward, a war of words ensued, with Diaz calling Noons a "paper champion," Noons calling Diaz a "crybaby" (among other unprintables). At another point, it got physical as the two were among the participants in a June 2008 post-fight brawl. But through it all, efforts at a rematch failed as Noons had a falling-out with EliteXC.

Nearly three years later, the two have finally found the time to throw down again, but desite the fact that Diaz initially accused Noons of ducking a rematch, he hasn't been obsessed by the idea of one, according to Gracie.

"Some time ago, he wanted it, I guess it was in the other weight class," said Gracie, referring to the fact their first fight was at 160 pounds. "It just didn't happen. He moved on and started fighting other opponents and got on with his life. This is kind of being brought back up all of the sudden, so I'm sure he wants to. I mean, who wouldn't? Anyone would want to avenge something like that. But I don't think it's something that has been gnawing at him, if that's what the implication is. He wants to fight everybody, and I guess anyone he's ever lost to."

In addition, Gracie thinks that in 2007, Diaz's performances were hurt by the difficult weight cut to 160 pounds. Now fighting at 170, the spark has returned, making him a tougher matchup.

"I started thinking, 'This doesn't look like the Nick Diaz I know in the gym," Gracie said. "I knew the Weight cut was really hurting the guy. He just didn't look good, didn't look sharp and you've got to be sharp, especially when you go down in weight because the smaller people are a lot quicker. If you're not sharp they're going to beat you to the punch. He did some lazy stuff, let it hang out a bit. He was succeptible to counters. He'd leave it out for a second or not bring his hand back up. Takedowns, striking, it all looked off.

"After the Thomas Denny fight, I said, 'Nick, you've got to move up in weight,' and since then we've seen a whole different fighter."

Since losing to Noons, Diaz has ripped off seven straight wins -- all by TKO or submission -- and also had plastic surgery that addressed a scar tissue problem that led to frequent cuts. In fact, the Noons loss is the only setback Diaz has suffered since May 2006, a stretch of 13 matches.

The Stockton, California fighter has had plenty to say about his Oct. 9 opponent in the past. Soon enough, he'll share a small cage with him, but for now, he can't even bear to share a telephone line.