KJ Noons vs. Nick Diaz Rematch Planned All Along 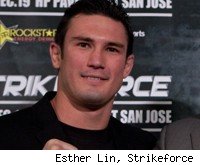 Ever since KJ Noons signed with Strikeforce, the plan all along was for him to at some point renew his rivalry with Nick Diaz.

"I told Scott [Coker] when I came to Strikeforce I want to fight the best guys," Noons told reporters Tuesday in a media call. "And this was a match they wanted to make in the future, and 160 was hard to make back then, and this was a fight that we talked about in the beginning that we wanted to make. I just had to get back into the MMA scene and win some fights."

After nearly two years of focusing exclusively in boxing, Noons returned to MMA this past March and has since reeled off victories in lightweight and 160-pound fights over Andre "Dida" Amade, Conor Huen and Jorge Gurgel. Noons appeared on the road to a lightweight title shot, but instead of challenging Gilbert Melendez, he'll be moving up a class to face welterweight champion Diaz on Oct. 9 in San Jose.

Noons says despite the detour from 155, he won't be abandoning his goal of winning the Strikeforce lightweight belt.

"As far as I'm concerned I was the No. 1 guy in line for the title," Noons said. "But Gilbert had some stuff going on (an injury), and I didn't want to wait and this match has been in the making."

Noons and Diaz first met in an EliteXC lightweight title bout back in November 2007 which ended in Noons battering Diaz for one round until the doctor stopped the fight due to cuts.

Noons' next fight was a title defense against Yves Edwards and taking away from Noons' 48-second TKO, was a post-fight melee between Noons' camp and the Diaz brothers. The bad blood between Noons and Nick continues to this day.

Still, Noons says there's always a potential after the fight for him to squash the beef.

"The balls is pretty much in his court," Noons said. "To tell you the truth, like I said, I can't stand the guy, personally, but I like to watch the guy fight."

If the two were to make up, it definitely wouldn't be on the teleconference. Diaz no-showing Tuesday's call only gave Noons another reason to dislike Diaz.

"But you know when he pulls s--t like this, he doesn't show up on a conference call, f--k, how do you like a guy like that?" Noons said. "You know what I mean? Or he punks off, or he gets your family involved? And s--t like that. It's like, f--k, you just wanna f--k this motherf--ker sometimes."

Although Noons says he has no respect for Diaz as a person, Noons made it clear on the call by repeatedly stating his admiration twoards Diaz when it comes to Diaz's fighting style.

"Let it be straight that I do have respect for Nick as a fighter," Noons said. "I think he's a good fighter. He's the best in the world at 170, that's why I'm fighting for his title, and as a person I have different views and that's kind of what makes this an interesting fight."