An Older, Wiser Chris Horodecki Looks to Continue His Charge at WEC 51 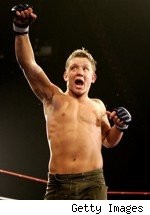 Chris Horodecki turned 23 last week. It's funny, he doesn't necessarily feel 23. He isn't even sure how 23 is supposed to feel, but he knows he doesn't feel like the fresh-faced college grads who are only now confronting the problem of what to do with the rest of their lives.

Horodecki already knows, because he's been doing it for the last five years.

"I'm young, but I'm no rookie in this sport," he told MMA Fighting. "I've been doing this for a long time, but I feel great."

Three years ago Horodecki was the IFL's undefeated wunderkind. He won seven straight fights in the upstart organization, and yet couldn't buy his own drinks at the post-fight celebrations.

Back then he was the poster boy for a national organization. Then the promotion went belly up in 2008, and Horodecki had to find a new home. He eventually found his way into the WEC's lightweight division, where he was no longer a star, but merely another one of the guys trying to claw his way to the top.

That meant he no longer had to shoulder the burden of being the face of a promotion. Not that the pressure was something that ever bothered him, even when he was a teenager fighting in front of crowds of thousands.

Horodecki got off to a rocky start in the WEC, suffering a first-round TKO loss to Anthony Njokuani in his debut. A moment's mental lapse resulted in the young Canadian getting dropped by a head kick and then finished off with a torrent of punches from Njokuani.

"I made a mistake and that's it," he said. "It was just a little slip and I paid for it. I went back to the drawing board and I moved on. You can't sit there and wonder about the what-ifs."

Horodecki rebounded in his second WEC bout with a submission win over Danny Downes, and now, at WEC 51 in Broomfield, Colo. this Thursday night, he'll attempt to get over the .500 mark in the organization when he takes on Ed Ratcliff on the preliminary card.

"It's going to be a fast-paced fight. He's a stand-up guy, and I'm a stand-up guy," Horodecki said. "We're definitely going to mix it up a little bit. Our styles are a little different, but both exciting and we're both going hard looking for that win."

To prepare for the match-up Horodecki has spent the last several weeks in Las Vegas, training and living with coach Shawn Tompkins, as well as with longtime friends and training partners Mark Hominick and Sam Stout.

There's a "good energy" between them in the gym and at home, according to Horodecki, as all three prepare for fights simultaneously – Horodecki and Hominick at WEC 51, and Stout at UFC 121 in October. The three also own a gym together - the Adrenaline Training Center – back in London, Ontario.

While Horodecki fights in the only weight class that's also featured in the UFC, where exposure and payouts are both significantly better, he insists he's in no rush to make the jump.

"Right now, my ultimate goal is the WEC championship. The WEC has proven, the lightweight division is stacked. You watch Anthony Pettis, Benson Henderson, Jamie Varner, [Donald] "Cowboy" [Cerrone], myself – it's a thick division. People talk about the UFC, but the WEC lightweight division is for real all on its own. I think the WEC puts on the most exciting cards in mixed martial arts. You never hear anyone after watching a WEC card go, 'Oh, that was mediocre.' People watch a WEC card, and they come out going, 'Wow, when's the next one?'"

What people may not realize about him, Horodecki said, is that while he's been competing as a professional longer than many 30-year-olds in the sport, he's still a work in progress. He just has more experience, and that's never a bad thing.

"I've been here before," he said. "I've fought on the big shows. I've been the main event. I've fought in front of big crowds. That stuff doesn't fluster me. I still train intense and work my ass off. I still have the same people around me. I just think I've grown, but I'm still not even close to what I'm going to be."