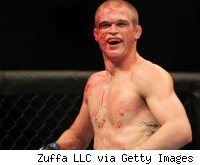 Sometimes I feel like MMA fans, much like MMA judges, are afflicted with a disease that makes us place undue importance on whatever we saw last.

That would explain why a takedown in the final minute of the round is somehow enough to negate all the punches a fighter took in the first minute, and also why many fans are talking about UFC 119 this morning as if it was the biggest waste of their money since "Waterworld."

What we saw on Saturday night was an exciting undercard eclipsed by an anti-climactic main event. Whatever highs we may have been riding after watching guys like Sean Sherk and Evan Dunham go at it were obliterated by the time we got to round two of Frank Mir vs. Mirko "Cro Cop" Filipovic. And since that was the last thing we saw before turning off the TV and trudging angrily off to the bed or the bar, it understandably left some people feeling cheated.

But at the risk of sounding like your overly peppy coworker on this Monday morning, let's look on the bright side. We got to see several good fights from Indianapolis on Saturday night, even if we didn't see them in ascending order. I swear, some nights the main event feels too much like New Year's Eve. We put so much pressure on it to be better than every other night, there's almost no way for it not to feel like a disappointment.

Of course, Mir and Cro Cop seem to throw an especially crappy New Year's Eve party -- the kind where by 11 pm everyone has come up with an excuse to leave -- but that's not the point. What I'm saying is, let's not ignore all the guys who fought well on Saturday just because of a couple guys who didn't. That's all.

Now let's take a look at the big winners, losers, and everything in between after UFC 119.

Biggest Winner: Evan Dunham
Before you furiously hammer out that angry email, yes, I realize that Dunham did not technically win on Saturday night. I also realize that I don't care, because he still had the most impressive performance. Exactly how judges Cecil Peoples and Glenn Trowbridge managed to see it 29-28 for Sherk, I'll never know. He did a good job either fighting off Sherk's takedowns or getting back to his feet in rounds two and three, and in the late going he absolutely battered Sherk on the feet. For some perspective on what that means, Sherk has never been beaten by anyone who was not either a current or future UFC champion. Giving a guy like that all he can handle is no small accomplishment. Whether the judges saw it or not, that's a performance Dunham should be proud of.

Biggest Loser: Mirko "Cro Cop" Filipovic
He was tentative on the feet and languid in the clinch, but perhaps most distressingly, he didn't seem to care. Even heading into the third round after clearly losing the first two plodding frames, there was zero sense of urgency on Cro Cop's part. It was as if he was content to go through the motions, right up until he caught by a knee to the chin. No one can denigrate what this man has accomplished in the sport over the course of his career, but these days he seems like he's just getting in there to collect paychecks. That's a bad idea. Especially in the UFC.

Best Walking Advertisement for Wrestling Programs Everywhere: Ryan Bader
It may not have been the most dominating performance we've ever seen from him, but Bader's win over Antonio Rogerio Nogueira demonstrated the value of being able to take the fight to mat whenever you feel like it. Give him credit, he was willing to mix it up on the feet with Little Nog quite a bit. But whenever he felt like it wasn't going his way he always had the option of putting the Brazilian on his back. That might have saved the day for him in the third round, and maybe even earned him a very tough showdown with Jon Jones. Talk about a prize most people wouldn't want to win...

Least Impressive in Victory: Frank Mir
How is it that, with all the work he's done on his wrestling, Mir couldn't get Cro Cop to the mat after two and a half rounds of trying? I realize much of his work has probably been on defending takedowns, since that seems like the only way he'll have any hope of ever reclaiming the UFC heavyweight title, but still. Mir spent all night pressing Cro Cop into the fence and waiting for Herb Dean to split them up. If he thinks that's the kind of performance that will send him rocketing up the ranks, he's kidding himself. The knockout at the end almost saved the fight, but coming as it did in the final minute, it just felt like a good scene that comes at the end of a very long and very boring movie. By that point so many people have walked out or fallen asleep, it hardly matters.

Best Worst Game Plan: Matt Serra
Serra is right to wonder what kind of idiot chooses to stand and bang with Lytle, despite a significant disadvantage in height and striking skill. At the same time, aren't you glad Serra is that kind of idiot? The alternative would be to try and smother Lytle against the cage (we've seen how popular that strategy is) or spend all night trying to get him to the mat, only to run into a likely stalemate once it gets there. This way, maybe Serra took a beating, but at least he also put on a show. It didn't do his face any favors, but so what? When you've got as much personality as Serra does, who needs to be pretty?

Worth Keeping a Close Eye On: Matt Mitrione
Obviously he still has some improvements to make, but he's about as good of a 3-0 fighter as you're likely to find in any organization right now. I'd still like to see how he'd do against a strong wrestler, since that does seem to be the litmus test that determines whether you've got a real future in the UFC heavyweight division, but that will come in time. For now, "Meathead" seems to be developing into a genuinely interesting future prospect, which is kind of weird, considering he's already 32. And by the way, the next time you want to break up with your agent, maybe Spike TV isn't the best venue. A simple phone call will do. Though no text message or email. Not unless you've been on less than three dates. That's the rule.