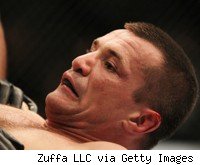 ivered a brutal knee to the head of Mirko Cro Cop late in the third round of their main event fight Saturday at UFC 119, winning by knockout to put an exclamation point on a fight that had been dull for the 14 minutes of action -- or inaction -- up to that point.

Cro Cop didn't appear to be seriously hurt and quickly got up after the knockout, but he had been knocked so senseless that he approached Mir afterward to ask him what happened. Contrary to the conventional wisdom before the fight that Mir would have to use his superior grappling to beat a better striker like Cro Cop, Mir managed to win the fight without ever going to the ground.

"I just pulled a victory over Mirko with no jiu jitsu," Mir said.

Mir and Cro Cop clinched against the cage in the early going, and when Cro Cop hit Mir with an accidental knee to the groin, the fight had to be halted for a few minutes while Mir recovered. Other than that there really wasn't much action in the first five minutes of the fight, with Mir and Cro Cop spending most of their time clinching against the fence, and Mir probably winning the round just because he was the one controlling the clinch.

More clinching in the second round led to the crowd in Indianapolis starting to boo, and UFC announcer Joe Rogan suggested midway through the second round that it felt more like a sparring session than a fight. Cro Cop did throw one of his trademark head kicks late in the second round, but he swung and missed, and Cro Cop and Mir just looked at each other and shook their heads at the end of the round, as if they were both waiting for the other one to get started.

The booing got louder in the third round, and Rogan was apologizing to the fans. But finally, with less than a minute to go, Mir landed that knee, Cro Cop crumbled, and Mir pounced on Cro Cop on the ground before referee Herb Dean stopped the fight.