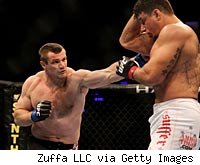 INDIANAPOLIS -- Mirko Cro Cop wasn't planning on fighting anytime soon until the emergency phone rang. Antonio Rodrigo Nogueira was out of UFC 119 and they needed him. Cro Cop of course said yes. One legend out, another in.

Cro Cop said no debate was necessary. After all, he's a fighter. It's in his blood. He loves to fight, to compete, to test himself. But before agreeing, Team Cro Cop asked the UFC to do him a favor in return; if he lost, they could not cut him from his newly extended contract. The deal was made, and Cro Cop competed against Frank Mir, ultimately getting knocked out in the third round.

Over his last 10 fights, the Croatian striker has five wins, four losses and one no contest. He's been knocked unconscious twice. And his best win has come against a relative MMA neophyte, Pat Barry. And so with all this, perhaps it's time to ask a sad but relevant question: Is it time for Cro Cop to call it quits?

Let's get one thing straight off the bat: legends get to call their own shots. Michael Jordan gets to clank bricks with the Wizards if he wants. Emmitt Smith gets to run on fumes for a couple years without the blue star on his helmet. Willie Mays gets to bumble around the outfield a little too long.

Why is this? First of all, success breeds respect, and respect breeds opportunities. When you're so good for so long, the rest of the world has to continually wonder if you can turn it around. And for the athlete, there's little doubt they can. In their mind, they still see things the same. It's the body that doesn't respond the way it once did. But some days, those same flashes of brilliance that brought them to greatness are still there. That alone makes it worth the risk of failure.

For years, Cro Cop's star shined brightly in Japan. He beat Kazushi Sakuraba and Mark Coleman. He fought a war with Antonio Rodrigo Nogueira, and took Fedor Emelianenko to a decision when it seemed like nobody but Nogueira could give the Russian a real fight. And on one fall night in 2006, he steamrolled through Wanderlei Silva and Josh Barnett on the same night.

His signature left high kick became the stuff of nightmares for opponents. It was always a threat, an unfired bullet in the chamber that would quickly settle turf disputes.

But the once-mighty weapon is practically holstered now. According to Compustrike, over his last 10 fights before facing Mir, he'd only averaged eight leg strike attempts per fight, and that includes knees. Against Mir, it did little but collect dust. Cro Cop threw only one left high kick in the entire fight. It came at the end of the second round, and it seemed to be fired off only to stop the boos, as Mir was hardly within striking distance. He did try a right high kick in the first, but that was the extent of using his best known weapon.

Instead, it seemed that Cro Cop was focused on playing defense, defending Mir's takedown tries and looking to counter during whatever prolonged periods of standup existed.

There's no shame for Cro Cop in losing to Frank Mir, a former UFC heavyweight champion. But the way in which he lost has to give some around him cause for alarm. Getting knocked unconscious is unfortunately part of the collateral damage involved with our sport. You fight long enough, and it's certainly possible it will happen to you. Mir's knee was no grazing shot; it landed hard and clean, and was a legitimate knockout blow.

More alarming is Cro Cop's inability to pull the trigger and fire his offense as he once did. Once one of the most feared strikers in MMA, he's no longer the knockout artist that sent a buzz into the crowd anytime he even lifted that left leg in the direction of his opponent.

Endings in our sport are not often happy. Cro Cop, or any other fighter for that matter, would rather not call it quits following a loss. The UFC promised him at least one more fight after facing Mir, so Cro Cop gets to call his own shot here. He's still competitive among mid-tier guys, and maybe it's unfair to judge him against a younger version of himself. Maybe we should just appreciate him for what he is today. After all, if he continues to fight on, we'll probably be right there watching. But this isn't out of left field. He's talked about the possibility of retiring after at least two recent fights, and some of us would probably appreciate it just as much if the legend perfectly timed one last shot: his exit.