Frank Mir Disappointed by Performance, but Happy to Win at UFC 119 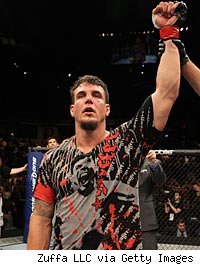 INDIANAPOLIS – Frank Mir walked into the UFC 119 post-fight press conference and sat down, leaning back in his chair. His body language told the story of dejection, an emotion at odds with the truth of what had just happened.

Rebounding into the win column six months after his interim title fight loss to Shane Carwin, Mir knocked out PRIDE legend Mirko Cro Cop late in the third round of their main event fight before 15,811 fans at Conseco Fieldhouse.

Despite the win, Mir voiced disappointment at his performance.

"No disrespect, it was a pretty s----- performance as far as I wanted to push the pace more," Mir said. "While he's swinging punches at you, it's not as easy. He caught my attention with his velocity. He did some different things. Exiting out to my left threw me. As far as striking, I could have gotten more busy. And pushing him against the cage, I drilled so much but I made mistakes that I wasn't making like lifting my arm up and exposing my ribcage. I think I had too much time to think and I had to clear my mind. But then again, without a single takedown, I was able to stand up with Mirko for two and a half rounds and win by KO."

The two spent great stretches of time clinching against the fence as Mir tried to drag the Croatian to the mat, where he hoped to take advantage of what he perceived to be a sizeable edge. He never got it there, as Cro Cop defended all the takedown tries. Not surprisingly, the struggle for position was not a hit with the fans.

Mir was ahead on the judges scorecards when the finish came. Out of a clinch, Mir pulled Cro Cop's head downward while delivering a perfectly place knee to the chin. Cro Cop crashed backwards to the mat and landed a couple follow-up punches before the referee quickly stepped in to save him from more damage.

It was the only finish on the main card as the four other fights went to a decision. Mir's attitude generally mirrored the night, which saw technical fights that lacked flash and seemed to leave most fans unsatisfied.

Still, there were important ramifications to the night, led by Ryan Bader, who stayed unbeaten and took a major step up in proving himself a viable contender by overcoming the grizzled veteran Antonio Rogerio Nogueira by unanimous decision in the co-main event.

The unbeaten prospect used his wrestling prowess to take Nogueira down early and often. His best moment came in the first, when he postured up in Nogueira's guard and bounced his head off the canvas with a series of punches from the top. The durable Brazilian withstood the attack, but Bader's takedowns proved too much to overcome.


But showing added maturity to his expanding game, Bader also showed good poise in the standup game against a fighter who has extensively trained with the Cuban boxing team. According to Compustrike, Bader outlanded Nogueira 65-34 during the fight in total strikes, and landed 31 percent of his arm strikes to Nogueira's 21 percent.

"He's a dangerous fighter, you've got to pick your poison with him," Bader said. "I felt I caught him in the first and put him down. But mainly I wanted to be careful with his boxing. I didn't want to just rush in and be counterpunched. There was a lot on the line and I pulled out the win, mixed it up a little."

The lightweight division saw the return of a former king. Coming back after a 16-month layoff, former UFC lightweight champion Sean Sherk found himself in the familiar win column, but in controversial fashion as the judges gave him the nod over previously unbeaten Evan Dunham.

Sherk easily took round one with takedowns and a 32-3 striking advantage, according to Compustrike stats. But Dunham tightened up his wrestling defense and stayed on his feet in the final two frames, when he outlanded Sherk 86-46.

"Yeah, it's definitely bittersweet, more bitter than sweet," said Dunham about losing the decision but having the fans in his corner. "In some ways you learn more from a loss. There's a lot to take from this. I'm definitely not happy. I've got to go back and train and correct my mistakes."

Dunham seemed to punctuate the win by landing 54 strikes to Sherk's 28 in the final round, but judges Glen Trowbridge and Cecil Peoples both scored it for Sherk. (Judge Kelvin Caldwell scored round three for Dunham.)

The crowd booed the decision, and Sherk in his post-fight interview, but it still had to feel sweet for the 37-year-old after the long layoff.

"We poured it all out there, he hit me, I'm bleeding," Sherk said later. "If I was a fan, I'd be having a good time watching it. I don't know why they were booing me. "

In a rematch of a 2006 fight which catapulted Matt Serra to the UFC championship, Chris Lytle finally found redemption, overpowering Serra in the standup department to win a unanimous decision.

Lytle, an Indianapolis resident and full-time fireman, won all three rounds on all three judges scorecards in front of a partisan hometown crowd. The two had promised a more exciting fight than their first go-round, which both later admitted to fighting cautiously with so much on the line. At the time, the two were fighting in the Ultimate Fighters season four finale, with a UFC contract and a title shot against Georges St. Pierre on the line. Serra won a close decision and went on to upset St. Pierre in a stunning title switch.

Lytle delivered on the win, earning his fourth straight in the octagon by outlanding Serra throughout. By the end, the brash New Yorker was bleeding from cuts around both eyes.

"You could tell we're both a lot better than when we last fought," Lytle said. "Especially because Matt's KO'd some good guys. He had more power than I gave him credit for in the past. I credit Matt, he gave me what I wanted. He's one of the best in the world on the ground, but still said, 'I'll bang with this guy." I've got to give credit to him. I was able to fight the fight I wanted and it was unbelievable to me. It was a great fight and fun to do it in front of my hometown."

Melvin Guillard and Jeremy Stephens came to town promising fireworks, but instead they delivered a strategic standup battle that was close enough to end in a split decision, with Guillard taking the judges' nod by scores of 30-27, 29-28, 28-29.

Ridding himself of the wild style that made his early UFC days a rollercoaster ride, Guillard showed off improved defense that made him a hard target for Stephens wild overhand rights.

"I had high expectations in the fight," Guillard. "I don't think he brought it like I dished it out. He didn't hit me a lot. He hit me three or four times. I had respect for the power he has, I didn't want to get clipped. I want to win, my ultimate goal is to fight for the title in 2011. I'm happy with the win but not the performance."

CB Dollaway came into the UFC with the hype of his former All-American wrestling status as a backdrop, but he struggled with the complex submissions game. Showing he may have finally turned the corner, Dollaway turned the tables on noted grappler Joe Doerksen, tapping out the veteran with a guillotine in just 2:13.

In a fight that couldn't have gone as he'd scripted, Dollaway (11-2) found himself taken down early, but he hitched on to a guillotine. Doerksen found a comfortable position and bided his time, waiting for Dollaway to release it, but just when it appeared he'd break free, they scrambled and Dollaway tightened it up. The two rolled around the cage several times as Doerksen tried to free himself, but Dollaway ended up on top in full mount and with the hold cinched. Doerksen quickly tapped for the surprising finish.

Matt Mitrione spent most of his time on The Ultimate Fighter being joked about as a crazy man, but the season 10 cast member is now the most high profile fighter of the group after moving to 3-0 by outlasting Joey Beltran in a crowd-pleasing slugfest.

Mitrione and Beltran went the full 15 minutes while keeping a frantic pace for much of the time, with several power-punching exchanges sprinkled into the three-round bout. Mitrione usually got the best of those, with the exception of once in the first round when Beltran briefly staggered him. It was the only round Beltran won on the judges' scorecards.

Mitrione battled back by avoiding the takedown and uses superior lateral movement to weave into and out of striking range. He battered Beltran with left hands and eventually opened a cut under his left eye. Beltran looked to be running out of steam, but he stayed game until the final horn.