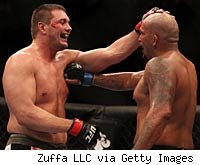 INDIANAPOLIS -- The firepower some expected to see at UFC 119 didn't materialize until the last minute of the last round of the last fight on the card.

And ironically, even Frank Mir, the only man who managed a knockout on the night, was not awarded a post-fight Knockout of the Night bonus for his third-round finish of Mirko Cro Cop in the main event.

Instead, in a rarity, UFC president Dana White bypassed Mir's KO finish and instead gave two Fight of the Night bonuses, awarding $70,000 each to the participants in the Sean Sherk-Evan Dunham and Matt Mitrione-Joey Beltran matches.

In addition, CB Dollaway took him the submission of the night award for his rolling guillotine that forced Joe Doerksen to tap out.

White confirmed there would be no Knockout of the Night bonus for Mir in the post-fight press conference, but did not explain why, though he did give a hint that he was not happy with the main event when discussing fan reaction to the show. In the promotion's maiden voyage to the Hoosier State, several of the bouts were booed by the Conseco Fieldhouse crowd, and seven of the 11 ended in decisions.

"I don't know what people do expect," a weary White said after the show. "These guys don't just freight train into each other. Sometimes you get fights that are really exciting and sometimes you don't. You've got to understand that when there's a lot on the line like the Bader-Nogueira fight. Alright, Cro Cop-Mir? I'll give you that one."

Mir and Cro Cop engaged in a clinch-heavy affair for much of the first two-plus rounds until Mir got a sudden finish with a knee to the chin that knocked the PRIDE legend cold.

Mitrione and Beltran fought a slugfest during the Spike portion of the card, with Mitrione winning a decision, while Sherk won a disputed split decision over Evan Dunham during the main card.