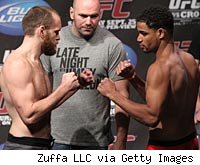 INDIANAPOLIS -- This is the UFC 119 live blog for the four preliminary bouts from the Conseco Field House.

Matches on the undercard are Thiago Tavares vs. Pat Audinwood, TJ Grant vs. Julio Paulino, Steve Lopez vs. Waylon Lowe and
Mark Hunt vs. Sean McCorkle.

Round 1: McCorkle shoots early and Hunt shrugs him off and feeds him a right hook. McCorkle shoots again and Hunt sprawls and scrambles to top position. He's in McCorkle's guard. McCorkle goes for a kimura, stretches it into an arm bar and gets it after a brief struggle for the tapout.

Round 1: Paulino switching stances frequently in the opening few seconds of the bout. Grant gets a muay thai clinch and scores a couple knees. Grant drags him to the mat a few seconds later. Paulino has a leg though as he tries to reverse position. They stalemate as they jockey for the top. Grant finally takes his back after a long struggle and briefly thinks about an arm bar but reconsiders and keeps his position. Paulino tries to turn into Grant's guard but nearly keeps trapped in an arm bar. He escapes and gets on top. That lasts only a few seconds, as Grant takes his back again. They return to their feet in the last 10 seconds and flurry, but MMA Fighting scores the round for Grant, 10-9.

Round 2: Grant catches a kick and completes a takedown against the cage. He ends up in side control a minute into the round, then moves to north-south position briefly before going back to side control. Lots of move-countermove, and Paulino uses a scramble to get back to his feet. Seconds later Grant drives in again for another takedown. Back to side control but Paulino is so active from the bottom that Grant can't muster anything powerful from the top. Grant tries an arm bar and Paulino sees it coming and ends up on top. They get to their feet and Paulino lands a hard right, but Grant takes the action back to the mat. He quickly ends up in full mount with 30 seconds left. Grant tries another arm bar as we near the closing horn but runs out of time. MMA Fighting scores the round for Grant 10-9.

Round 3: Paulino scores a hard right early, Grant goes to his back in hopes of taking it down. Paulino doesn't take the bait. Grant tries a takedown, this time Paulino stops it. Eventually though, Grant initiates a clinch and drags him down. Grant briefly abandons his sub tries for some ground and pound, but most of it is deflected or misses altogether. Paulino tried a kimura and they scrambled again. Hunt nearly pulled off a rare triangle from the back but Paulino broke free and ended up on top. Grant stays relentless and gets top position again. Grant takes the round and should win a decision in this grappling-heavy matchup.

Round 1: Lopez takes the center of the cage early, but they're both cautious in the opening two minutes. Lowe shoots in for a takedown, Lopez shucks him off at first, but Lowe doubles up on the effort and takes him down midway through the round. Lowe struggles to advance and finally invites Lowe back to his feet. With 20 seconds left in the round, Lowe ducks under a Lopez left hook for the takedown. The two takedowns alone will probably win him the round 10-9.

Round 2: Lopez beginning to stalk Lowe around the octagon now, but still a bit hesitant about the shoot. He lands an uppercut near the fence but they reset seconds later. Lopez seems to be getting the timing down on Lowe's shots; he stuffed one and landed a hook. Much better round for him. Lowe took him down with two minutes to go, but Lopez landed a series of rights from his back before Lowe advanced to side control. Lowe scored with some knees to the body as we reached the one-minute mark. Lopez regained guard with 45 seconds left and threw elbows from his back. The scoring of this round may tell the story; MMA Fighting scores it for Lopez 10-9.

Round 3: A Lowe right hand briefly buckled Lopez, but he recovered quickly. Lopez rushed in with a knee to the body, and Lowe caught it and turned it into a takedown. Working in Lopez's half-guard, Lowe managed a few elbows. Lopez worked for a kimura at the midway point of the round. Lowe pulled free and switched up to elbows and short strikes. A left elbow strike sliced Lopez open with 1:45 left. As the round was nearing an end, referee Herb Dean called timeout to check the cut. He was allowed to continue although the blood stream was pretty constant. Lopez wiped his eyes clear and continued, stalking Lowe around the cage as the end neared. The horn sounded and Lowe took the round, likely giving him the decision.