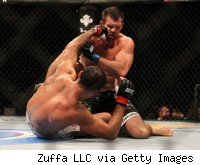 The bout may set Bader up for a showdown with Jon Jones, in what would be a match-up of the two best young fighters in the light heavyweight division. If Jones is next for him, Bader will need to be better than he was Saturday night against Nogueira.

Two minutes into the first round Bader took Nogueira down, put him on his back and unleashed some ground and pound that looked like it had the potential to finish the fight. But Nogueira is great from his back, and he managed to pull Bader into his guard and hold on until he had recovered and was ready to get back up. Bader won the round based on what he did to Nogueira on the ground, but Nogueira looked good on his feet as the round came to an end.

The second round featured another Bader takedown, but this time Bader wasn't able to do anything with it before Nogueira pushed him away with a kick and got back to his feet. In the stand-up neither man accomplished much, but Bader probably landed enough punches to earn a 10-9 round.

In the third round Bader appeared to be tiring out, and Nogueira managed to land more punches. But Bader managed a couple of takedowns, including one at the end of the round, and he finished the fight on top of Nogueira and landing punches. It wasn't exactly a dominant performance from Bader, but all three judges scored all three rounds for him. Bader's record improves to 12-0, while Nogueira falls to 19-4.
http://xml.channel.aol.com/xmlpublisher/fetch.v2.xml?option=expand_relative_urls&dataUrlNodes=uiConfig,feedConfig,localizationConfig,entry&id=936547&pid=936546&uts=1285480376
http://www.aolcdn.com/ke/media_gallery/v1/ke_media_gallery_wrapper.swf
UFC 119 Photos
INDIANAPOLIS - SEPTEMBER 25: Mirko Cro Cop reacts after being knocked out by Frank Mir during their UFC heavyweight bout at Conseco Fieldhouse on September 25, 2010 in Indianapolis, Indiana. (Photo by Al Bello/Zuffa LLC via Getty Images) *** Local Caption *** Mirko Cro Cop
Zuffa LLC via Getty Images
Getty Images North America