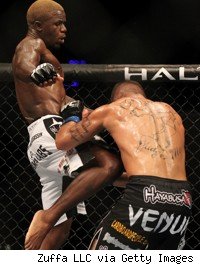 Melvin Guillard beat Jeremy Stephens Saturday at UFC 119 in a split decision that didn't have a whole lot of action, and that left the fans in Indianapolis booing.

UFC President Dana White, who had hyped the Guillard-Stephens bout as a barn-burner, took to Twitter during the fight to admit he had been wrong about that. It just wasn't a particularly entertaining performance from either fighter.

Stephens landed a right hand that knocked Guillard down just a couple seconds into the first round, but Guillard bounced back up and didn't look any worse for wear. For the rest of the first round it was fairly even in the stand-up, with Guillard landing a few more strikes, and moving more effectively. The first round was all stand-up action and never went to the floor.

The pace slowed down considerably in the second round, and it wasn't helped by the fact that the fight was halted twice because Stephens and Guillard each landed kicks to each other's groins. The fighters again stood and traded for all five minutes without ever going to the floor, but without a lot of power shots landing, some of the crowd started to boo.

The booing grew louder in the third round, as the fight that was promoted as a knock-down, drag-out brawl turned into more of a cautious, tactical kickboxing match. Although Stephens did land a hard punch and follow it up with a flying knee, that was about the extent of the excitement until the fight drew to a close.