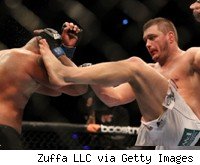 Mitrione's only previous pro MMA fights were wins over his Ultimate Fighter castmates Marcus Jones and Kimbo Slice. Beltran represented a small step up in quality of competition, and in that respect it was a solid win for Mitrione, even if it wasn't a particularly pretty fight.

Mitrione got things started early with a head kick and was mixing up his striking from the get-go. But after a couple minutes, Beltran managed to get the upper hand in the striking and then took Mitrione down and got on top of him. Mitrione was active from his back and attempted to secure a triangle choke, but Beltran ended the round on top of Mitrione in side control.

The second round started with Mitrione and Beltran winging sloppy punches at each other. Mitrione wobbled Beltran with a hard straight punch to the face, but Beltran managed to recover and clinch with Mitrione against the cage. With a minute to go in the round they exchanged sloppy punches again, in the kind of brawl that didn't show a lot of technique but did get the crowd on its feet.

Early in the third round Mitrione connected with a few punches and opened a cut near Beltran's eye, and by that point Beltran looked like he was ready to give up. As Mitrione pounded away, Beltran barely even fought back, and midway through the round it was clear that Mitrione was going to win the decision.