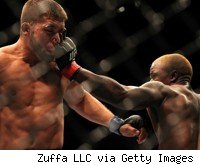 INDIANAPOLIS -- This is the UFC 119 live blog for Melvin Guillard vs. Jeremy Stephens, a lightweight bout on tonight's UFC pay-per-view from the Conseco Field House.

Round 1: Guillard tripped on the way in; looked like a knockdown but he got back to his feet in a flash. Big overhand right by Guillard is partially deflected. Guillard then tagged him with a straight right. Stephens threw a wild, monster left hook but it missed badly. Guillard is fighting a much more controlled fight than he has at other times in his career. You can see the Greg Jackson influence on him. Guillard landed a right and Stephens countered with a right of his own. MMA Fighting scores it for Guillard 10-9.

Round 2: Stephens attacks the legs early with kicks. Guillard lands a kick to the body, then a knee to the body. They clinch briefly, but break seconds later. An inadvertent low blow leads to timeout, and Guillard apologizes for the errant kick. After a near eye poke, Guillard suffered a low blow, and so we have another timeout. On the restart, Stephens landed a sharp right, but Guillard shrugged it off. Another Stephens leg kick scored as the round neared an end. The promised slugfest hasn't materialized as they both respect each other's power too much to abandon caution. MMA Fighting scores the round for Stephens 10-9.

Round 3: The struggle to mount any extended offense continued early as neither man could land more than a single blow at a time. The crowd became restless with it, even though both fighters were clearly working hard. Stephens kept swinging a wild right, but Guillard's chin was never there to be hit. Guillard is much better defensively than he once was, and he's also more conservative on offense, at least in this fight. Stephens landed a left hook that knocked Guillard backwards, and Stephens thew a flying knee, which Guillard easily sidestepped, sending Stephens into the cage. Last 20 seconds. Guillard landed a jumping knee, then a pair of right hooks as the horn sounded. A very tough final round to score. MMA Fighting scores it for Stephens 10-9.