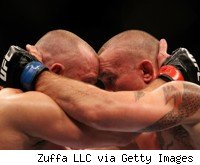 INDIANAPOLIS -- This is the UFC 119 live blog for Matt Serra vs. Chris Lytle, a welterweight bout on tonight's UFC pay-per-view from the Conseco Field House.

Serra and Lytle were both roommates on The Ultimate Fighter 4 and met in the finals with Serra beating Lytle by split decision. Expect a much different fight this time around.

Round 1: The crowd wastes no time in chanting the name of their hometown boy Lytle. Serra attacks with punches to the body. Lytle is head-hunting early but no success. He does land a short right off a quick clinch. Serra lands a hard right that buckles Lytle briefly. Lytle landed a right, then another one. Somewhere along the way, he cut Serra across the left eyebrow. Not a very big cut. He scores a left. Serra tries a Superman punch that misses. Good round, and MMA Fighting scores it for Lytle, 10-9.

Round 2: A Lytle right behind the ear sends Serra to one knee, but the New York fires back with a hard right. Heavy leather there. Quick jab from Lytle, then an uppercut. Lytle with another right behind the ear as he begins to take control. Serra landed a pair of stinging rights during an exchange that saw Lytle snapping his head back with a hook. Lytle dazed Serra against the cage in the final 30 seconds with a sustained flurry, but Serra fought back with his own firepower. It was not enough for him as Lytle took the round 10-9.

Round 3: The hug before the opening round. The first round was close enough that it could tied on judges scorecards. Serra is still working to Lytle's body in the third round, and landing them. He briefly tried a takedown but gave it up. Serra now is trickling blood under his right eye, while Lytle has redness around his left eye. The offense in the third is start and stop, with neither guy able to sustain any momentum. With a minute left, the crowd starts to rally them to the finish. A last flurry to end it, and the two embrace at the final horn.