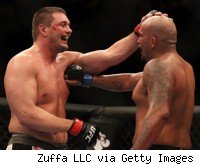 INDIANAPOLIS -- This is the UFC 119 live blog for Matt Mitrione vs. Joey Beltran, a heavyweight bout on tonight's Spike TV portion of the card.

Both men are entering this fight 2-0 inside the UFC Octagon. Mitrione holds wins over Marcus Jones and Kimbo Slice. Beltran is coming off wins over Tim Hague, Rolles Gracie and Houston Alexander.

Round 1: Mitrione pounds Beltran with a left early. The Indianapolis-based fighter has the crowd firmly in his corner. Mitrione is backing Beltran up just by coming forward. He hunts the head kick but it doesn't connect. Beltran flurries and knocks Mitrione against the cage. Mitrione looked staggered. Beltran goes low and scoops him up for a takedown. Good action early as we reach the midway point. Mitrione tried a triangle but Beltran escaped. The crowd starts a "Meathead" chant, trying to rally Mitrione to his feet. Beltran stays active, crowding him against the fence. Beltran advances to side control with a minute left. Mitrione gets back to guard and tries another triangle, but it's not close. Beltran stole the round with his takedown and ground work, 10-9.

Round 2: Mitrione lets his hands go early. They flurry for a moment but Beltran again drops for the takedown try. This time, Mitrione is ready for it and works free. Mitrione is getting the better of the standup now, and he rocks Beltran backwards with a left. He chases him to the cage but Beltran recovers quickly, and lands a hard left of his own. They clinch at the midway point. Herb Dean calls a timeout to cut some loose tape on Beltran's glove and they resume. Another huge exchange at the 1-minute mark as the two heavyweights let their hands go. Beltran flinches first, going for Mitrione's legs. Big head kick lands for Mitrione to punctuate the round as it ends. It goes to Mitrione 10-9.

Round 3: Another head kick for Mitrione early in the third. It's partially blocked by Beltran, who looks to be tiring a bit. Mitrione's stamina looks excellent. He tags Beltran with a left and sidesteps oncoming fire. Beltran bleeding under the left eye and noticeably breathing hard as he backs up from Mitrione's advances. Mitrione keeps coming forward and firing. With less than a minute left, Beltran comes forward and tries to exchange fire. Not much lands from either guy as the clock runs low. They clinch against the fence and flurry in the final seconds before the horn sounds. MMA Fighting scores it for Mitrione, 10-9.