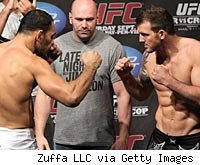 INDIANAPOLIS -- This is the UFC 119 live blog for Antonio Rogerio Nogueira vs. Ryan Bader, the co-main event of tonight's UFC pay-per-view from the Conseco Field House.

Bader faces his toughest challenge yet against veteran Nogueira. Nogueira is coming off a controversial win over Jason Brilz and will need a win to stay in title contention.

Round 1: Bader presses the pace early, moving forward while Nogueira's footwork keeps him out of harm's way. Bader puts Nogueira on his back early. Some vicious ground and pound bounces Nogueira's head against the mat, but he's still defending and pulls Bader into his guard. Bader's got Nogueira stacked against the cage and in his own corner, with his cornermen yelling instructions. Nogueira works free with one minute left. Nogueira throws a left and Bader ducks under for a takedown. Nogueira sprawls. Moments later, Bader takes him down, but only for a moment. MMA Fighting scores the round for Bader, 10-9.

Round 2: Nogueira looks a bit more comfortable this round, taking the center and walking Bader around the outside of the cage. Bader shoots for a takedown midway through but abandons it midway. Nogueira throws a kick, Bader catches it and this time takes him down. They're near the center of the cage this time, so nothing trapping Nog. Bader doesn't want to play jiu-jitsu with him and lets him up. Bader dumps him down again briefly, but doesn't follow him there. With less than a minute left, they clinch, but stalemate and break. Bader lands a hard right hook with about 15 seconds to go. MMA Fighting scores the round for Bader, 10-9.

Round 3: Bader took an eye poke early in the round, leading to a timeout. Nogueira landed a short right. Bader moved in for a couple takedown tries but wasn't fully committed. On the third, he put Nogueira down, but Nogueira scrambled free in a blink. Nogueira tagged Bader with a left at the midway point as he began to walk Bader down. Things opened up later in the round. Nogueira fired a left that landed on the chin. Bader stuck his tongue out, then blasted into a double-leg takedown, putting Nogueira on his back. Bader landed a few cursory punches as the round ended. MMA Fighting scores it for Bader, 10-9.