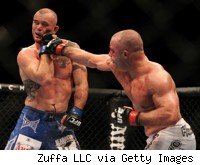 Chris Lytle out-boxed Matt Serra for 15 minutes Saturday night at UFC 119, winning a unanimous decision in a fight that consisted of little more than Lytle and Serra standing in front of each other and trading punches.

The bout was a rematch of Serra's victory over Lytle in the Ultimate Fighter 4 Finale four years ago, and Lytle said this time the fight went exactly the way he wanted it to go.

"I just wanted to do the fight different from last night," Lytle said.

Lytle came out swinging in the early part of the first round and landed a few right hands to bruise the left side of Serra's face. The first round was basically a boxing match, with Lytle landing more punches, and hitting Serra harder than Serra was hitting him.

In the second round the punches started coming even harder, with Lytle knocking Serra down but Serra getting right back up and landing a big body shot. Midway through the round Lytle rocked Serra with a couple of big shots, and a couple of times late in the round Serra was staggered so badly that he looked to be one punch away from getting knocked out. But Serra did manage to survive, even though he clearly lost the round.

A minute into the third round -- 11 minutes into the fight -- Serra finally tried the first takedown attempt of the bout, although he just weakly grabbed a leg and quickly let it go. This fight was destined to be a boxing match, and that played to Lytle's strengths. It was no surprise that all three judges scored it 30-27 for Lytle.