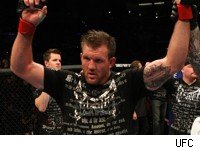 INDIANAPOLIS -- Just over two years ago, Ryan Bader walked into a Las Vegas gym with a dream to fight in the UFC. He was a blue-chip prospect, a two-time collegiate All-American wrestler who'd steamrolled his way to an unbeaten 7-0 record.

Bader made the cut for The Ultimate Fighter, where he quickly impressed everyone, but perhaps none more than season eight coach Antonio Rodrigo Nogueira. In fact, Nogueira thought so highly of Bader that he immediately earmarked him for his first pick in the draft.

"I remember we were in the octagon, me, Frank Mir and Dana White, the first day we pick the guys," Nogueira recalled. "They were training, light sparring and we were watching before we picked them. I saw him shoot the double leg, it was so good. And he had fast hands. He was my first pick. I said, 'That's my golden boy.'"

Nogueira was in Bader's corner throughout that show, and again when Bader TKO'd Vinny Magalhaes to win the season and earn a UFC contract, and he's still fond of the young fighter, but he'll have to put the bond aside on Saturday. The "Golden Boy" gets his chance to move closer to the gold if he can beat his old coach's twin brother, Antonio Rogerio Nogueira, in the UFC 119 co-main event.

It's an odd dynamic, but one the sides have handled in a gentlemanly fashion. Bader has spoken of the honor he's felt in being matched up with a Nogueira, while the senior Nog has complimented his former charge on his progression and professionalism.

After Little Nog and Bader weighed in on Friday night, Bader shook hands with his opponent, and then made sure to look for his old coach, sliding past UFC president Dana White to pay his respects to the legend who once manned his corner.

But Bader has also insisted that whatever intel Big Nog might have learned from their stint together in 2008 is long past its expiration date.

He says that he entered the TUF house as a wrestler but that he's grown his game immensely over time, to where he now feels comfortable regardless of where the fight takes place.

Bader (11-0) has yet to face a setback in the cage, but he has been through tough fights, requiring all three rounds to earn decisions over both Carmelo Marrero and Eric Schafer. In his last fight, though, he took a step up in class and responded by knocking out Keith Jardine, but even Jardine doesn't pose the problems posed by Little Nog.

The Brazilian standout is slick with his hands, and though he lacks the wrestling polish to withstand Bader's powerful takedowns, his jiu-jitsu could put the young upstart in dangerous positions.

Big Nog of course has stated his belief that his brother will win, but the other scenario is that he helped build the monster that destroys his brother. He knew this day might one day come. He knew what he was seeing in that Las Vegas gym two years ago, and now, his brother is the obstacle in the way to determine just how golden the "Golden Boy" really is.