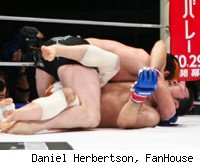 Jason "Mayhem" Miller said before the fight that he wanted to submit the Japanese legend Kazushi Sakuraba at Dream 16. He did just that.

Miller dominated the past-his-prime Sakuraba, beating him up with punches before finishing him with an arm-triangle choke. It was the first time Sakuraba had tapped out since his first MMA fight, in 1996.

"This has been my dream my whole life," Miller said afterward. "And I say to everyone, believe in yourself because you can live the dream."

It wasn't much of a fight -- the 41-year-old Sakuraba really can't hang with opponents like Miller anymore -- but it seemed to be a victory that meant a lot to Miller, who showed a great deal of respect to Sakuraba before the fight, and did so again as he addressed the crowd both in English and in Japanese afterward.

Miller is well known as the host of Bully Beatdown, and he'll likely be back in the United States fighting for Strikeforce early in 2011. But the bigger question is what's next for Sakuraba. He's one of the sport's all-time greats, but it might be time for him to ask whether he should really keep fighting.