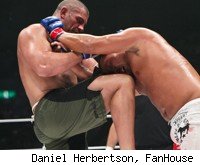 James Thompson lost a split decision to Japan's Yusuke Kawaguchi at Dream 16, and he said afterward that the Japanese judges had cheated him out of a victory he earned.

Kawaguchi said he would be willing to give Thompson a rematch, but Thompson said he was so dejected by the decision that he doesn't know if he can keep fighting.

"I don't know how much is left in me to keep picking myself up," Thompson said.

Although I personally scored the fight for Thompson, I thought it was close enough that it could have gone either way, and I think Thompson's comments afterward are way over the top. Thompson came out slow and got off to a bad start in the first round, and he should blame himself for the loss, not the judges.