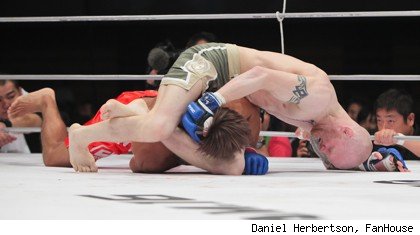 The best featherweights fighting in Japanese MMA these days are Dream champion Bibiano Fernandes and Sengoku champion Marlon Sandro. But many of the best of the rest were in the ring Saturday at Dream 16, a fight card that featured five featherweight bouts.

Of the 10 featherweight fighters in action, the best of the bunch was Michihiro Omigawa, who beat the American Cole Escovedo with a straight arm bar two and a half minutes into the first round. The submission appeared to break Escovedo's arm and showed once again that Omigawa is one of the truly elite fighters in the 145-pound and under class. Omigawa has been one of the sport's most active fighters over the last couple of years, fighting seven times in 2009 and three so far this year. He's also been one of the best, climbing up the featherweight rankings by going 8-1-1 since the start of 2009.

In another match-up featuring a Japanese fighter whipping an America, Hiroyuki Takaya needed just 1:45 to punch out Chase Beebe. It was Takaya's second fight this year and second first-round knockout. Beebe has now lost six of his last eight fights.

And in a result that made me happy as a longtime fan, Joachim Hansen used a sweet triangle choke to submit Hideo Tokoro at the 2:48 mark of the first round. Hansen is an exciting fighter who's had a run of bad luck and hadn't won a fight since taking the Dream lightweight tournament title more than two years ago. It's good to see him get his hand raised again.