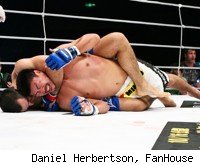 The fight was widely regarded as a mismatch, and for the most part it was. Although Mizuno held his own on the ground at times, it was a relatively one-sided fight that lasted just over six minutes. Mousasi finished the fight with a rear-naked choke that caused Mizuno to tap out very quickly.

In April, Mousasi lost badly to Muhammad "King Mo" Lawal, and he still has plenty of work to do on his wrestling before he can be considered one of the truly elite light heavyweights in MMA. But he showed on Saturday that he is the best in Dream.