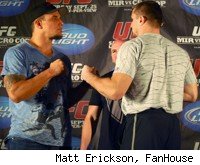 INDIANAPOLIS -- Frank Mir will hold a 25-pound weight advantage over UFC 119 opponent Mirko Cro Cop when the two square off in the heavyweight main event Saturday night at Conseco Fieldhouse.

Mir, a former UFC heavyweight champion looking to rebound from his UFC 111 loss to Shane Carwin, checked in at 252 pounds for the bout, while Cro Cop -- a winner of two straight -- tipped the scales at 227.

"I'm not taking him lightly by any means," Mir said shortly after weighing in. "It'll be a very short night for me if I do. I'm just going to go out there and try to take care of him quickly, make it a quick night."

All 22 fighters comfortably made weight for the event, which marks the organizational debut in Indiana.

Ryan Bader and Antonio Rogerio Nogueira both weighed in at 205 for their light-heavyweight co-main event fight.

The largest cheers of weigh-ins were reserved for hometown fighter Chris Lytle, a longtime UFC veteran who is still an active fireman in the Indiana fire department.