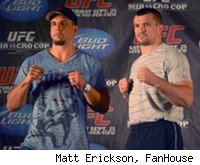 INDIANAPOLIS -- Just two weeks past his 36th birthday, Mirko "Cro Cop" Filipovic is steaming towards a career crossroads. At one time probably the most devastating striker among the MMA world's heavyweights, Cro Cop no longer engenders fear from those who face him. He stalled out in his first UFC run in 2007, and the current one has had its ups and downs.

His UFC 119 main event matchup with Frank Mir could prove his last chance for a last run as an elite world heavyweight. While the Croatian is still dangerous and worthy of respect for his storied history, it must also be noted that he has not defeated a world-ranked heavyweight since the night that was the defining moment of his career. Just over four years ago, Cro Cop knocked out Wanderlei Silva and battered Josh Barnett into submission on the same night to become the PRIDE Open Weight Grand Prix champion.

Since that night in Saitama, Japan, his career has never reached the same heights. Though he holds a respectable 6-3-1 record since, he's never threatened at making a run for the UFC championship, something that seemed like a lock when he made his organizational debut in Feb. 2007.

Perhaps Cro Cop (27-7-2) knows that his time may be running short, because when Antonio Rodrigo Nogueira withdrew from the UFC 119 main event, Cro Cop dove headfirst into the role, accepting immediately.

As measuring sticks go, Mir (13-5) is a perfect foe for Cro Cop. At 31 years old, Mir is still near his prime and a former champion, so no one is likely to dismiss his credentials as a credible opponent. Now it's simply up to Cro Cop to prove that he can overcome younger, bigger heavyweights.

He'll try to do it the same way he always has. Since he first put on MMA gloves, Cro Cop has preferred to keep fights in the standup position, where his boxing and kickboxing backgrounds have nearly always given him a strong advantage. While once he was downright terrifying with his kicks ("right leg, hospital; left leg, cemetery," was his saying), it's a weapon he has holstered more and more over the last few years.

According to Compustrike, over Cro Cop's last 10 fights, he's averaged only eight leg strike attempts per fight (and keep in mind that factors in both kicks and knees). That change has made him a bit more one-dimensional than he once was, and therefore easier to address.

Cro Cop's no fish out of water on the ground -- he's only tapped out once in his career -- but against someone as analytical as Mir, Cro Cop's straight forward approach might lead to trouble. Add to that, the fact that he has appeared a bit gunshy at times over his last few fights, and it becomes obvious why Mir is nearly a 3-to-1 favorite by some oddsmakers.

At this point of his career, Mir is a more well-rounded fighter than Cro Cop. His jiu-jitsu is still, of course, excellent, and his wrestling is passable. The biggest improvements, though, have come in his striking game. A few years ago, his punches were hardly a threat to be considered, but as he proved with his KO of the iron-chinned Antonio Rodrigo Nogueira, along with a powerful knockdown of Cheick Kongo, that's no longer the case. Mir is much lighter on his feet than he used to be, and he hits a lot harder.

Still, it will be interesting to see if he chooses to test his standup skills with a guy who competed in over 20 K-1 kickboxing bouts, or emphasizes his clear advantage by trying to drag it to the ground. Let's not assume it will get there, though. Cro Cop has very underrated wrestling defense, as evidenced by the fact that his last 10 opponents have only completed five of their 22 takedown tries against him.

Because of Cro Cop's pedigree, conventional wisdom would say that Cro Cop has the edge in the striking department. I would say it's not a clear-cut case. In his last few fights, Cro Cop has been slow to fire and does not use his best weapons as much as he used to. That combination is a dangerous game. He may be able to get away with it against mid-tier fighters like Mostapha Al-Turk and Anthony Perosh, but Mir will likely find a way to exploit those holes.

There is one X-factor at play that really hasn't been mentioned in the leadup to this fight, and that's Mir's gas tank. Mir was self-aware enough to know it was an issue, and has often admitted it. He's told us that the problem's been addressed over the last couple of years. But he hasn't been put in a position where he's had to fight into the third round in over four years. He hasn't even had to go to the midway point of a fight in that time. In fact, the average time of his last seven fights is just three minutes, 17 seconds.

Cro Cop has always been nothing if not an extremely durable fighter. He's never been easy to finish, and even if you think he's not what he once was, he's still incredibly difficult to put away. Just ask Pat Barry, who had him in major trouble in their June bout, only to see Cro Cop turn the tide in the third when Barry tired out. Could history repeat itself with Mir on Saturday? We have to account for the possibility that late-round stamina becomes a factor.

Most likely, though, Mir is going to figure Cro Cop out. Unless the Croatian great can turn back the clock and recall a performance out of his brilliant past, he no longer shows the dimensions that will give top-level heavyweights fits. Cro Cop's going to have to dust off that left high kick, and fire his guns at will, and that's not something he's been anxious to do lately.

The result of this fight doesn't seem too hard to figure out on paper, but fighters who've reached the heights of greatness like Cro Cop often have a few final moments of fleeting glory before they hang it up for good. It might well come Saturday, but all the current evidence points to the opposite corner. Frank Mir via second-round submission.