On September 25th at DREAM.16, Kazushi Sakuraba will face Jason "Mayhem" Miller in what will most likely be the showcase fight for the promotion's first domestic prime-time event of the year.

In an interview that is typical of the enigmatic Kazushi Sakuraba, he met with the press at his Laughter7 gym in Tokyo recently and talked about entrances, refusing to train at his own public training session and Mayhem's comments that he is fighting his idol and that he will be the first to submit the Japanese pioneer.

Press: Are you going to show us something today?

Sakuraba: What shall I do?

I can show you in slow motion. Shall I pose for photographers?

So, basically, you aren't gonna show us any real training today?

That's right. I was told to do an open training session, but I don't want to. You know that video thing we see at the venue before the fight? People sometimes come to film that thing, but I don't allow them to film if I don't feel like it.

Well, yes. Even before I became pro, I thought that training is not something that you show to just anyone. I train for the fight, there's things I want to keep confidential.

Well, what kind of training have you been doing for this fight?

Mayhem is an athletic fighter and he is capable of everything, so I train everything. Including grappling, takedowns, striking, etc.

Have you thought of Mayhem as your opponent ever since he came into DREAM?

But we saw you saying "I wanted to fight Mayhem" in the footage showed during the press conference.

Well, yes. There are several significant fighters and I thought Mayhem is one of the best among them.

In what way do you think Mayhem is an attractive opponent?

I only saw couple of his past fights so I can't really say, but as I said, he is an athletic fighter. I guess his ability to move a lot makes his fight interesting. When I spar with guys in the lighter weight divisions, there are lots of fighters who are very athletic. One of the reasons why I wanted to fight Mayhem is to see how athletic a fighter can be in my weight division. Also, I've never trained with him, so I wanted to know how powerful he is. That's about it.

What are your thoughts on his entrances?

I saw him throw money on the cat walk once. I brought some to give him today. It's a donation. It isn't right to waste money! 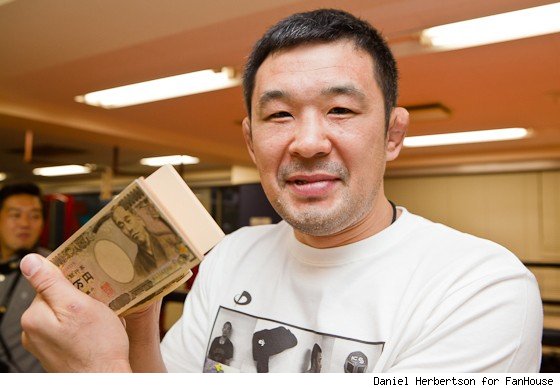 The "money" is toy money that Sakuraba took out of a real bank envelope. No one really laughs at Sakuraba's joke.

So, are you gonna donate that money to Mayhem?

Oh, so if he's gonna give away money again, he should use this toy money instead of real bills? Is that what you mean?

Yes. I'm gonna give this to him at the rule review. So did I amaze you?

No one answers Sakuraba's question.

How about your entrance? What will you do?

I've been thinking about it a little, but I have no specific ideas yet. Just a vague idea. I'll think more about it, but no dancing for me. No dancing and no money. Hey, can I dismissed from this interview? I already gave you some funny stories to write about. 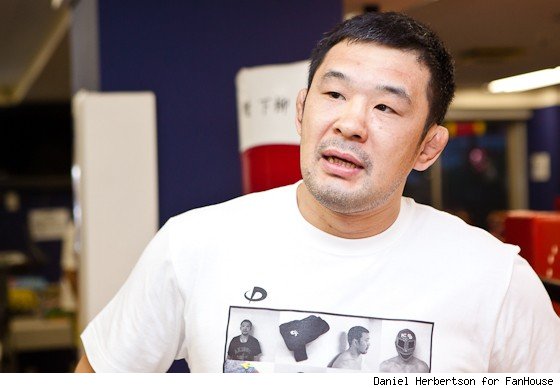 Sakuraba's manager asks for more questions from the press.

Mayhem was saying that he wants to be the first to submit you.

I talked about this during an interview session with some magazine, but I have tapped out lots of times during training. It's just that nobody has submitted me in a fight. There are lots of fighters who have the ability to submit me. I always try to be one step ahead of my opponent though so I'm not concerned about his comment.

Mayhem said that you are his idol.

If he means it, he should demonstrate his respect. If he means it, he shouldn't punch me! Punches? Kicks? Throw a knee at me from the top? No way if he respects me from heart! If he does that during the fight, I'm gonna say "Hey, what you are doing right now is not even close to respecting me!" Then I'lI probably throw him on the judge's table.

Are you gonna tell Mayhem about this at the rule review as well?

Yes. "Let's have a good fight! I know you aren't going to punch me!"

So, will you show us some training?

No! I can pose for you though. Shall I do something for you?

Sakuraba's manager jokes about him going back on his promises.

OK, I won't say no. I'm not gonna show you my serious training, but I'll do something.

Sakuraba proceeds to pick up fellow pro-wrestler and Laughter7 stablemate Katsuyori Shibata and do an old wrestling drill with him. 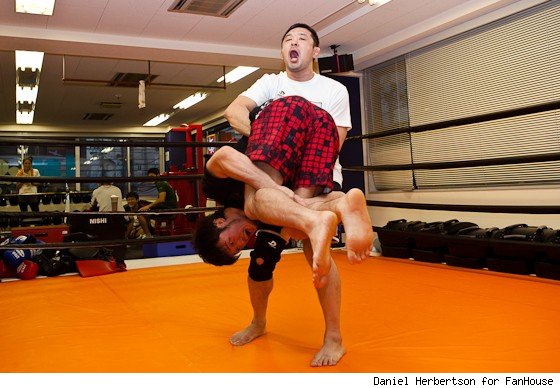 Sakuraba's manager indicates that it is not enough.

Sakuraba then does the same kind of false counting with pummeling for underhooks and then pushups. 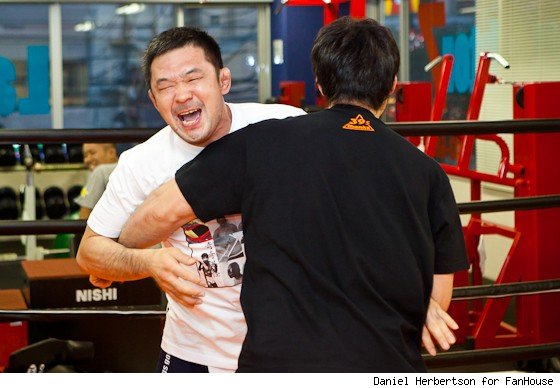 Finally he strikes a victory pose with Shibata. 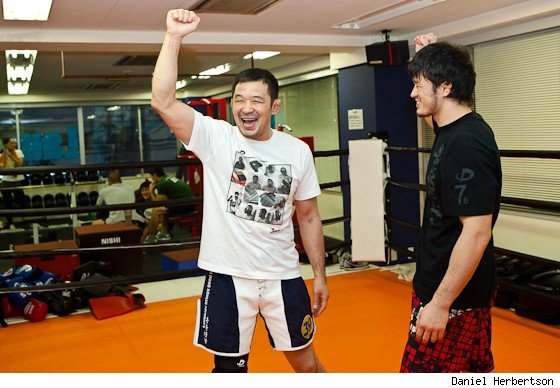 Sakuraba's manager seems slightly annoyed but attempts to get the press to ask Sakuraba some questions about the "training" he just did. The press decline.