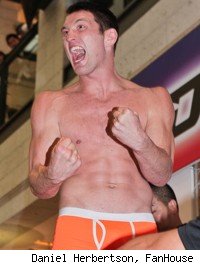 DREAM needed to pull out all out the stops for DREAM.16. Their last event for the year is also the first for the year that will be broadcast during primetime domestically and given their financial woes, they need to impress. DREAM were still booking fights until less than 24 hours before DREAM.16 but it was worth it, they managed to put on the card that they needed.

Kazushi Sakuraba vs. Jason "Mayhem" Miller is one of the most crowd pleasing matchups of all time. Tatsuya Mizuno will be the Japanese underdog against the foreign belt collector Gegard Mousasi. Shinya Aoki will try to take another step towards reclaiming his spot among the top lightweights in the world against a man who once upset another Japanese champion - Marcus Aurelio. Four great featherweights fights that will define the future of the division.


After the break, predictions and a preview of what may be a pivotal card in DREAM's history.

Mizuno's incredible victory over the hardest hitting man in MMA Melvin Manhoef was the performance of a lifetime but he is not going to repeat it here. Mousasi is one of the division's best, and he is better than Mizuno in every aspect of the game and is capable of winning any way he chooses, but should take home the first-round submission and the first 205-pound strap.
Pick: Mousasi

Shinya Aoki vs. Marcus Aurelio
Marcus Aurelio has been brought in to lose against a Japanese champion in a non-title fight on one other occasion – against Takanori Gomi in 2006. Aurelio shocked the world as easily he passed guard and sunk an arm triangle choke to bring an end to Gomi. It wouldn't be an upset of that caliber if Aurelio pulled of the win here and his method to victory is easy to foresee – pound out Aoki on either the feet or one the ground, but I consider it unlikely as he really doesn't have the power of a Joachim Hansen or "Mach" Sakurai.

With Aurellio's grappling acumen, it will be extremely tough for Aoki to finish him but with his control and aggression from the bottom and his mastery of the ring, he should be able to take the unanimous decision and it should play out a lot like the second Gesias "JZ" Cavalcante fight.
Pick: Aoki

Jason "Mayhem" Miller vs. Kazushi Sakuraba
Mayhem's dream fight should actually play out like a dream for him.

Mayhem is an impossible match for Sakuraba - he is almost impossible to submit and is bigger, stronger and more athletic. Mayhem has talked about stealing and taking Sakuraba's magic in the lead up to this fight and it should in fact be a passing of the torch as he hands out a one-sided yet entertaining beating to the legend, catapulting himself into stardom in Japan.
Pick: Miller

Satoshi Ishii vs. Ikuhisa "Minowaman" Minowa
A late addition to the card but Minowa was already prepared to face James Thompson. Satoshi Ishii's condition is unknown but he should be in condition as he was originally planned to fight in Sengoku in late October.

We still haven't seen the 2008 Judo gold medalist against enough quality opposition to tell where he is at with his transition to MMA. We learned in the Hidehiko Yoshida bout that Ishii can kind of strike but lacks power, finesse, gets tired and he hasn't really brought in his judo prowess yet.

Not wanting to repeat my mistake of Yoshida vs. Ishii – I will side with experience. Minowa wont be able to submit him obviously but should take a tactical and tough fought decision.
Pick: Minowa

Mitsuhiro Omigawa vs. Cole Escovedo
Former WEC champion Cole Escovedo made quite the impression with Japanese fans in his first fight in DREAM. Those in attendance were treated to the most beautifully violent high kick/diving superman punch of all time when he knocked out Yoshiro Maeda but unfortunately those at home only managed to catch the high kick as no angle of the diving punch was shown.

Until Maeda ate shin, he was battering Escovedo with strikes and looked to be on his way to a decision but as soon as Maeda got sloppy, he was punished. Escovedo's height may present a challenge to Omigawa but given that he (controversially) got past Hatsu Hioki then he should be able to stay tight and bob and weave his way to the inside to land hooks and body shots to get a decision.
Pick: Omigawa

Chase Beebe vs. Hiroyuki Takaya
Beebe has gone 0-2 in DREAM and is being brought in again to lose against Hiroyuki Takaya. Beebe is hard to KO but Takaya should manage it as he keeps his distance and batters Beebe with his fists.

The featherweight division in Japan is blowing up and Takaya, Miyata, Ishida, Omigawa and others are being brought up as challengers for Bibiano Fernandes' crown. Watch these fights for an indication as to who gets the next title shot.
Pick: Takaya

Joachim Hansen vs. Hideo Tokoro
Hansen's experiences as a featherweight have not been positive. After a rough weight cut he first faced promotional king Bibiano Fernandes and while he was competitive in losing a decision, clearly lacked the power that defined him as a lightweight. In his next venture, he took on the 2009 Featherweight GP runner-up Hiroyuki Takaya and for the first time in his career he was knocked out.

"Hellboy" should have the weight cut down to a science now, and if he can bring in his power and stamina that he had as a lightweight, he should run through Hideo Tokoro and knock him out with one of his signature takedown counter knees.

If he hasn't mastered the cut, he should still win a decision and either give up on cutting to featherweight or find someone who can help him retain his power.
Pick: Hansen

Kazuyuki Miyata vs. "Lion" Takeshi Inoue
Former Shooto 143-pound champion "Lion" Takeshi Inoue makes his DREAM debut and should be a new face to the vast majority of fans. Lion has a tendency to get rocked and then respond with a comeback KO. It makes for incredible fights but at the elite levels (and without Shooto's now retired standing 8-count) he will never have a chance to make that comeback.

Without Shooto's pillow gloves, it will be interesting to see how much his power increases but if Miyata plays it smart and keeps Lion on his back, we will never see it. Miyata takes the decision and continues his featherweight rampage.
Pick: Miyata

Note to Lion Takeshi: Wear your spats. They are the punk equivalent of Shinya Aoki's disco spats and that is awesome.

"Wicky" Akiyo Nishiura vs. Mitsuhiro Ishida
Mitsuhiro Ishida is just the kind of fighter that Wicky can't deal with. Wicky is very difficult to submit but he simply can't stand up when he is taken down. Ishida should have no problem derailing the hype train that Wicky got with his KO over Hideo Tokoro at DREAM.15 and will easily take the unanimous decision by riding the fight out on top.
Pick: Ishida

Yusuke Kawaguchi vs. James Thompson
DREAM did an excellent job in convincing the DEEP Megaton Champion Yusuke Kawaguchi to step in at the very last minute to face James Thompson. Thompson was left without an opponent when Satoshi Ishii was loaned out once again to FEG to face Minowa and Kawaguchi represents the most interesting opponent in Japan for him.

Kawaguchi is tough as nails, he hits hard and can take a hard hit and has been in some real wars throughout his career. His is a style that James Thompson will embrace. The fans will be the real winners here as both fighters beat each other senseless but Kawaguchi will take home the slightly larger trophy.
Pick: Kawaguchi