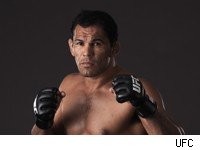 INDIANAPOLIS -- Still in the midst of recovering from anterior cruciate ligament surgery on his left knee, and with a hip surgery still to come, Antonio Rodrigo Nogueira is a full 5-6 months away from returning, making the spring of 2011 the rough target date for his next octagon date.

The MMA legend, who was supposed to face Frank Mir in the UFC 119 main event, still traveled to the show to work the corner of his brother Antonio Rogerio Nogueira, who is competing in the co-main event against Ryan Bader. Walking slowly and with a noticeable limp, Nogueira said the injury dated back to two years ago and was discovered to be a complete tear during a medical examination.

"I went to the doctor, I had like six doctors in front of me," he said. "My knee was out of place. I decided if I fight, I have to be 100 percent. I had the same injury last time I fought Mir. It's kind of an excuse if I lose the fight, so I want to be 100 percent so I can do my best in the cage."

Nogueira (32-6-1, 1 no contest) has lost two of his last three in the newly supercharged UFC heavyweight division, and he readily admits that the competition among the best heavyweights has ramped up a few notches in the last year or two.

While the current kingpin is Brock Lesnar, Nogueira smells change in the air. Asked his opinion on Lesnar's upcoming title defense against Cain Velasquez, he picked the unbeaten Velasquez to end Lesnar's reign.

"I think Brock's got the advantage with his size, but Cain Velasquez is a more complete fighter," he said. "He can kick, he can punch and can use his wrestling. I think he's a better wrestler than Brock Lesnar. I think his ground game will be the difference in this fight. I think, my prediction is that Cain Velasquez is going to win the title."

Although he'll have to rebound from a rough stretch that includes the first TKO & KO losses of his career, the all-time legend still hopes to have more glory days ahead.

Asked if he had one more run at the title in him, a hint of a smile broke out on his face. Being maybe half a year away from getting back to the octagon, the future can't come fast enough.