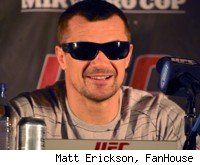 Based on appearance, Mirko Cro Cop didn't exactly reassure fans and media of the condition of his right eye at the UFC 119 pre-fight press conference Thursday at the Old National Centre in Indianapolis, Ind.

A reserved Cro Cop sat in his assigned seat wearing sunglasses, but it didn't take long to hear from Cro Cop about his condition, as the first question was directed towards the Croatian heavyweight.

"Mirko's been checked out by doctors in Croatia, doctors here," Dana White said. "Mirko's eye is good and ready to go. He wouldn't be fighting if he wasn't."

Cro Cop's late eye injury is the story coming into UFC 119 after the main event was put into question this past Friday in Croatia at the most inconvenient time -- during the last minute, of the last round, on the last day of sparring.

"It was one nice poke in the eye," Cro Cop explained. "We did sparring in UFC gloves and unfortunately -- I had headgear, but it just went through. Headgear protects face but it wasn't enough for a finger."

Cro Cop's opponent, Frank Mir, who had already lost his first scheduled opponent Antonio Rodrigo Nogueira to injury, recalled sitting in his car wondering which other heavyweights are available.

"I won't lie to you," Mir said. "When I heard possibly eye injury. I was slightly paranoid."

If Cro Cop wasn't medically cleared, the injury would have dealt a crushing blow to a card already short on star power.

"We had no other plans," White said. "We were just praying that Mirko was going to be fine."

The condition of 36-year-old Cro Cop's eye only added to the question marks about Cro Cop going into Saturday's fight. Cro Cop, who accepted the fight on only five weeks' notice, hasn't sounded confident in his interviews with the Croatian media and said Thursday he accepted the fight because he felt a responsibility to the UFC.

"Don Corleone sent me an offer that I couldn't refuse," Cro Cop joked at the presser.

As a fighter though, Cro Cop said he simply could not turn down the fight. It wasn't in his nature to factor in that Mir would arguably be the toughest opponent of his UFC career.