Darren Uyenoyama Upsets Shuichiro Katsumura at The Way of Shooto 5 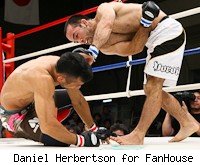 Shooto newcomer Darren Uyenoyama handed out a one-sided beating to current Shooto 132-pound world champ Shuichiro Katsumura in a non-title fight at The Way of Shooto 5 on Thursday.

Uyenoyama, who is most well known for his highly entertaining bout with Hideo Tokoro at DREAM.4, was superior with his wrestling from the clinch and was able to put his opponent on his back. Katsumura's only option was to scramble for heel hooks. Avoiding the leglocks with general ease, Uyenoyama kept a stream of ground and pound flowing that finally proved to be too much for the champion at 3:53 of the second round.

A rematch for the Shooto title will no doubt be in the works but is not likely to take place until 2011 given the schedule that has been outlined for the rest of 2010.
In the fight of the night, Shooting Gym Yokohama's Junji Ito just managed to put away a tough Jesse Taitano with 10 seconds left in the last round.

Ito made his striking prowess apparent early with a left that sent his opponent to the mat and got Taitano thinking about takedowns rather than trading with the Japanese 115-pound powerhouse. Ito's sprawl proved up to the task though as none of Taitano's takedown attempts were successful and Taitano was forced to box on with Ito but he again found himself taking powerful punches and then combinations as Ito's confidence grew.

A small cut that was bleeding heavily over the eyes of Taitano was checked twice but deemed not to be an issue. The cut sparked some desperation in Taitano as he rallied in the last round to land some powerful one-two's of his own but while Ito was initially shocked by the rally and power of Taitano, he managed to regain his composure quickly and control the center of the ring with his hands. Referee Wakabayashi took mercy with only ten seconds left when Taitano ate a flurry of punches in the corner and collapsed to the canvas.

With his dominating win, Ito will certainly be high on the list of challengers for 115-pound champ Rambaa "M-16" Somdet.

In a rematch of their 2008 draw, Hiromasa Ogikubo dominated Gutsman's So Tazawa with ground and pound to take a unanimous decision. Tozawa wasn't able to launch any attacks or reversals off his back as Ogikubo kept on a the pressure with punches that ended up heavily marking the face of Tozawa and giving Ogikubo the comfortable win.

Norifumi "KID" Yamamoto student Yusuke Yachi put on yet another impressive striking display against a Jin Hyun Kim to get the win by unanimous decision. The 2009 Shooto Rookie Champion survived some stiff ground and pound in the first round to get his own strikes going on the feet to draw the opening stanza but in the second Yachi was landing almost at will with kicks and hard straight punches, giving him 20-18 on all three judges cards.

In a 154 lb rookie tournament semifinal bout, Takanori Gomi product Akira Okada out-powered Yoshinori Suzuki to get the unanimous decision and move on to the the rookie tournament finals to be held on December 18th. Okada will face the winner of Bunpei Umezono and Kota Shimoishi.

Yo Saito came close with a guillotine early against Hayato "Mach" Sakurai student Yoshifumi Nakamura but while the submission failed, he ultimately took the majority decision to move on to face the undefeated Yuta Sasaki at the 143-pound rookie tournament final.