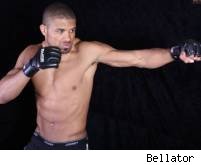 Another chapter was written Thursday night in the great story of MMA fighter Bryan Baker, who's continuing to fight in the cage while he fights cancer outside the cage.

The 24-year-old Baker defeated MMA veteran Jeremy Horn Thursday night at Bellator 30 in his first bout since publicly revealing that he has cancer. It was an impressive showing from Baker, who came back from a rough first round to win a unanimous decision.

"I feel great," Baker said. "Everybody that supported me, loved me, gave me prayers and support, I thank you."

Baker had a tough challenge from Horn, who has had more than 100 pro MMA fights. But he's accustomed to overcoming tough challenges. He's one of the best stories in the sport.

West did a nice job of using his jiu jitsu to control Vega from the bottom, winning a split decision in a fight that the judges saw as a lot closer than I saw it. I thought West was a 30-27 winner, but two judges saw it 29-28 for West while the third had it 29-28 Vega.

"It was way tougher than I expected," West said. "That guy's got really good takedowns and good top position and is way stronger than I thought he would be."