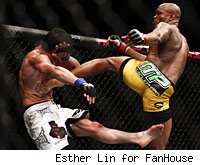 roid test has created a domino effect in the UFC's middleweight division, and the biggest beneficiary is Vitor Belfort, who will be the next challenger to Anderson Silva's middleweight title.

UFC President Dana White announced on Twitter that Belfort will fight Silva for the belt. Contrary to reports that an injury forced Belfort out of his previously scheduled bout with Yushin Okami, White said Belfort is healthy and has simply been moved to the top of the list of title contenders.

Belfort vs. Silva -- a fight White has wanted to make for more than a year -- now appears likely to be the main event of UFC 125 on New Year's Day.

With Belfort moving up to No. 1 contender position, Nate Marquardt has taken his spot against Okami in the main event of UFC 122. White also said that the Marquardt-Okami fight will get the next shot at the title after Silva and Belfort meet.

And that all means there's not going to be a title shot any time soon for Sonnen, who had previously been scheduled for an immediate rematch with Silva after their brilliant fight at UFC 117. The California State Athletic Commission says Sonnen will be suspended for using performance-enhancing drugs.

So the highly anticipated Sonnen-Silva rematch won't take place any time soon and might not ever take place at all. And the UFC middleweight division will move on without Chael Sonnen.