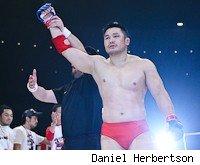 Only three days out from DREAM's first prime-time event for the year, FEG have added some much needed star power, booking Ikuhisa "Minowaman" Minowa to fight Beijing gold medalist Satoshi Ishii in an open-weight bout.

Minowa was initially planned to face James Thompson, but while Thompson was in the air on the way to Japan, the bout was canceled. DREAM Event Producer Keiichi Sasahara stated that he was planning on adding one more fight to the card but Thompson was not mentioned specifically as a participant and the matter was not addressed at the press conference.

DREAM.16 is the second occasion where a Sengoku contracted fighter has fought under the FEG banner but as yet, no DREAM fighter has ventured in to Sengoku. K-1 President Sadaharu Tanigawa stated that if Japanese MMA continues to grow then DREAM fighters will participate in Sengoku events.

Sengoku representative Taro Mukai who was also present revealed that Ishii had one fight left on his contract, but they were not able to come to terms on actually booking a fight for him.

DREAM.16, September 25 from the Nippon Gaishi Hall in Nagoya, Japan.