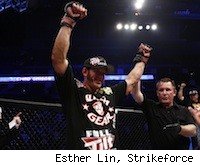 Ever since Chad Griggs defeated former pro wrestler Bobby Lashley at Strikeforce: Houston, things in his life have been, as he puts it, "pretty crazy, but good crazy." The calls have come in a steady stream. His website traffic has jumped tremendously. Suddenly people in the MMA world know his name. That'll happen when you beat an 8-1 favorite on national TV.

But recently Lashley appeared on "The MMA Hour" and offered a handful of reasons why he wasn't at his best on that particular night, even claiming at one point that had he been completely healthy, he would have notched "a pretty quick win" over Griggs in Houston.

Not surprisingly, this is the kind of thing that rubs Griggs the wrong way.

"Everybody can kind of take it however they want. It's an excuse," Griggs told MMA Fighting. "I know a couple days before he said he was 100% and he was going to smash me and all that. I've never been much of a trash talker and I'm not going to talk any now, but I would have hoped that he would have given me a little credit and said he made a few mistakes or would have done things different or it just wasn't his night, but I guess he's trying to find a reason why he lost. It is what it is, but I feel like it's a little bit of bad sportsmanship."

The way Lashley tells it, he was suffering from mono and dehydration going into the fight, and that's why he couldn't maintain the pace he set in the first round.

While Griggs admits he has no way of knowing how much of that is legitimate and how much is a comforting tale for Lashley to tell himself, he points out that Lashley didn't start the fight like a man with health issues, though he did end it more or less exactly how Griggs hoped he would.

"The first round I'd say he was pretty dang explosive, pretty powerful. Then he got tired. He used a lot of energy. That's pretty much what we counted on the whole training. He's carrying so much muscle mass, [the game plan] was to survive that first round, make him work and make him tired, and then take advantage of him being tired in the second part of the fight. That's what happened."

And though Lashley claimed that the cut he suffered near the end of the first round didn't affect his mental state, Griggs still sees it differently.

"No question at all [the cut] affected him. Like I said before, he hadn't really been in a fight up to that point. He hadn't really been hit by anyone. He was in fights where he would take guys down and they would lay there and let him punch them out."

Lashley said he's already asked Strikeforce for a rematch with Griggs because, as he put it, "when you have certain events like I did that sort of hindered me from being able to open up and fight, I've got to go back."

But according to Griggs, Strikeforce officials have not mentioned the possibility of a rematch, though they have suggested other potential opponents.

"They have not said anything to me [about a rematch]. I know they promised me another big fight. I want to keep moving up, so I'm pushing for another big name. We've heard Brett Rogers, and there's been a few times thrown out there. I'd prefer not to fight Bobby again because I feel like we've already done that. ... If he comes in and wins then it's like, okay, he was sick and that was a fluke. If I win again, then I'm in the same place I'm already at."

For now Griggs is content to return to his normal life as a firefighter and paramedic in Tucson, Arizona while he waits to hear what Strikeforce has planned for him next. He knows the organization wasn't planning on him winning that fight, he said, but none of that mattered once the cage door closed. The aftermath of his victory has been an education unto itself.

"It's funny how the fight world works," said Griggs. "You're nobody and then you have a big fight and all of a sudden you're somebody. Then you can't stay off the phone. But it fizzles out, and if you lose then you're nobody again. They're quick to throw you off to the side. It's an interesting sport."