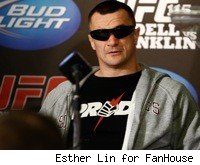 Mirko Cro Cop has been cleared by an ophthalmologist in Indianapolis to fight Saturday at UFC 119 against former champion Frank Mir.

The UFC reported Tuesday on its official website that Cro Cop been evaluated and cleared, and additionally, MMAFighting.com has confirmed with athletic commission assistant director Andrew Means that all remains for Cro Cop is the typical pre-fight physicals subjected to all fighters on the card.


More: Watch UFC 119 Live Online | UFC 119 Fight Card | UFC 119 Results
Croatian news portal Index.hr was first to report Friday that Cro Cop's spot on the card was in jeopardy after suffering an injury to his eye from an accidental eyepoke in a final training session with his team in Croatia, and although UFC president Dana White quickly took to Twitter to refute the report, Cro Cop's ability to fight depended on the commission's approval upon arrival to the U.S.