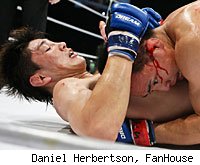 DEEP bantamweight champion Masakazu Imanari has been tapped to welcome current DREAM competitor DJ.taiki back to DEEP on the promotion's 10th anniversary card on Oct. 24 at the JCB Hall in Tokyo, Japan.

Imanari, who last month made his second successful title defense, will not be putting his belt on the line against DJ.taiki, who, after all, is on a two-fight losing streak.

Imanari (20-7-2) is a DEEP regular on a a four-fight win streak. His last loss was outside the promotion, at DREAM.9, to current Dream champion Bibiano Fernandes in the quarterfinals of the 2009 DREAM Featherweight GP. One challenge for the leglock specialist Imanari is the stat that DJ.taiki has never been finished in a fight. All seven of DJ.taiki's losses were by way of decision.

DJ.taiki (11-7-3) began his career with Pancrase and fought for DEEP three times before jumping ship to DREAM in April 2009. As a competitor under the DREAM banner, DJ.taiki holds a win over Hideo Tokoro and losses to Kazuyuki Miyata and Mitsuhiro Ishida.

The previously confirmed bouts for the anniversary show are below.