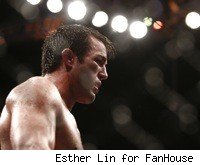 Chael Sonnen's camp has released a statement for the first time since it was reported last Saturday night that the middleweight contender tested positive for a performance-enhancing drug following his UFC 117 loss to Anderson Silva.

In an MMA Fighting exclusive, Sonnen's manager, Mike Roberts, wrote that Sonnen will appeal the California State Athletic Commission's claim that he tested positive for "abnormally high" levels of testosterone and that Sonnen will break his silence on the matter in the coming days.

"It is our policy not to comment on pending actions by the Athletic Commission. Chael is consulting with his legal advisors and physicians and will have a statement in the near future. Chael will file an appeal with the CSAC and looks forward to working with the Commission to resolve this matter."

The 33-year-old reportedly received formal notice of his test failure last Friday and has 30 days in which to file his appeal. Once he does file his appeal, it will be heard at the next CSAC commission meeting on Dec. 2 in Sacramento, Calif.

Sonnen is subject to an automatic one-year suspension and $2,500 fine. He was scheduled to fight Silva in a title rematch in Jan. 2011, but that fight is obviously on hold until the CSAC makes a final ruling on the case.

The CSAC has yet to officially announce the positive drug. They were expected to make an announcement Monday afternoon.