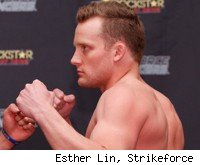 The bout, a welterweight prelim, is not part of the Showtime card, but is expected to be streamed on Sherdog.com.

Bergmark (6-1-1), a longtime student under Cesar Gracie, made his Strikeforce debut in June, winning a decision over Vagner Rocha on the undercard of Fedor vs. Werdum.

Terry (7-2)'s last fight was a loss to Tarec Saffiedine by unanimous decision on the televised portion of Strikeforce Challengers 6. Prior to the February loss, Terry won both his Strikeforce fights last year.